The 11-foot gator broke into the family’s home through a low window in the kitchen, the Clearwater Police Department said on Facebook. The homeowner immediately called the police and a trapper responded to the scene to remove the gator. 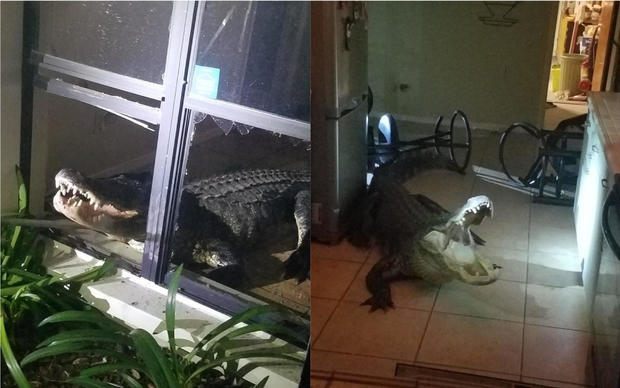 The beastly reptile was captured and there were no injuries, the police said. The department shared several photos of the unwanted visitor on Facebook. One shows the gator sticking its head through the broken glass window. Another photo shows the mess he made in the kitchen, knocking over a table and chairs.

It’s unclear what drew the gator inside the family’s kitchen. It seems he wanted in so badly, he was willing to smash through glass.

In 2017, a Florida golf course made headlines after a massive 800-pound alligator moseyed across the green. Last year, a gator was spotted walking across the tarmac at Orlando International Airport. Luckily, passengers who spotted the creature were safely inside the plane, although they were briefly delayed, as the gator prevented the plane from taxiing to its gate.

While burglars are usually not gators, Florida has seen more than its fair share of gators in odd places. Last month in Sarasota, Florida, another family had a middle-of-the-night encounter with an 11-foot gator. It didn’t break into their kitchen, but it did take a dip in their pool.

If you happen to encounter a gator in the wild — or in your kitchen — your safest option is to keep your distance. Jack Hanna, director emeritus of Columbus Zoo and Aquarium, advises staying at least 40 to 50 feet away from any potential alligator hazard. At 20 feet, Hanna says an alligator could “outrun any human.”

But if you can’t get away, wildlife experts recommend you fight back. If an alligator bites you, make a commotion by hitting or kicking it or poking it in the eyes. Gators will retreat from prey they can’t easily overwhelm.