It didn’t take long Thursday for a picture of a seemingly dinosaur-sized crocodile posted on Reddit to trickle out over the Internet — or for users to point out the photographic trickery involved.

Shortly after Reddit user kohlio posted the picture to the site under the heading “They killed this in my friends hometown back in Africa,” posts started popping up questioning the veracity of the photo, followed by responses asking how anyone could fail to recognize the obvious forces at work — namely, the trick of forced perspective.

“Based on the number of people there I was guesstimating at over 20 feet. That is troublesome because the largest ever nile croc is supposedly 21 feet,” wrote Reddit user uncwil in response to the original post. 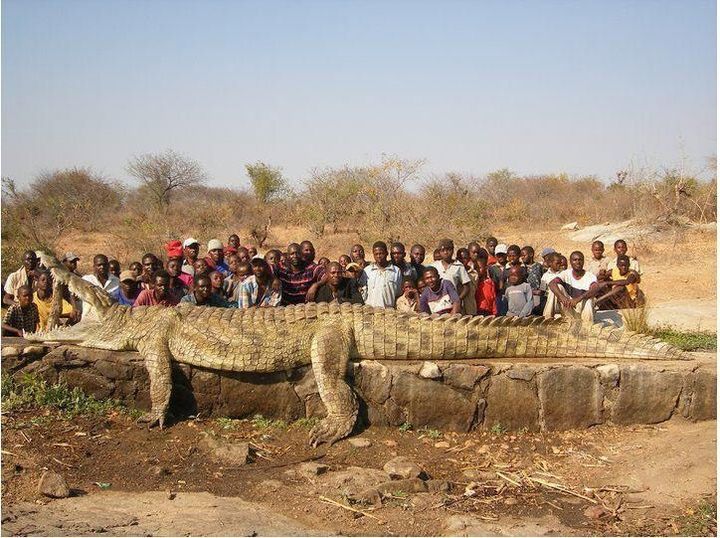 “That thing is at least 20ft long. I couldn’t imagine being one of the people hunting it,” another user wrote.

But users quickly pointed out that the people in photograph are sitting quite far back from the crocodile, making the animal appear much larger than it probably is.

“For this image (and the monster hog image also posted in comments) they are using a “forced perspective” camera trick that makes the animal appear much bigger than it actually is (although the croc still is huge),” Reddit user GWS2000 wrote. “Notice nobody in the photo has a hand or arm hanging over the front side of the animal. They are sitting further back from the animal than the picture implies.”

Richard Freeman echoed those sentiments on the cryptozoology blog “Still On The Track,” writing that “There is little close to the crocodile to indicate its length, but if the wall is the same hight as the one the people are sitting on in the background then it would seem that the croc is not remarkably large 14-15 feet; about average for an adult.”

Those suspicions were verified by the text accompanying an original print of the photo, which Reddit users were able to trace back to a posting on a French site, among other places.

According to the caption, the crocodile was shot and killed by an animal control officer in Zimbabwe after it had attacked and killed a number of fully grown cows. Regarding its size, the caption offered the following estimate:

This beast of a crocodile was shot in the extreme north of Zimbabwe on the border with Mozambique and unfortunately, circumstance did not allow for a measurement. However, several guestimates put it over 16 feet. Our own estimate (based on a 25 mm cigarette filter lying slightly in the foreground) does suggest it measures closer to 15 feet. A return trip is planned to the little dam where this croc was shot, and a measurement will be taken from the wall upon which the croc is laying. Watch this space!

Reddit users noted that the picture recalls an earlier instance in which a man used forced perspective in a hunting photo to make it appear that his 11-year-old had captured a monstrous hog dubbed “Hogzilla” by the media.

As it turned out, experts confirmed that pig in question was in fact huge — 8 feet long and 800 pounds — but not as massive as photos originally suggested, according to the Associated Press.

Check out footage of the Philippines crocodile below: