Agiant squid weighing more than 700 pounds has washed up on Golden Mile Beach in Britannia Bay, South Africa. The remains of the Giant Squid washed up on a beach around 95 miles north-west of Cape Town on June 7.

The giant squid was found by Adéle Grosse of Cape Town, who told Live Science: “At first, I just wanted to get it back into the ocean. [But] on closer observation, one could see that it was dead.”

“Oh my word, seeing it at first really took my breath away. Honestly, it looked like a majestic prehistoric animal.”

It is unclear how the giant squid died, but Grosse said: “We had big swells the night before, and it was my understanding that the swell washed up this beautiful squid onto the beach in the early hours of the morning.

“We looked for bite marks or injuries and could not really find anything.” 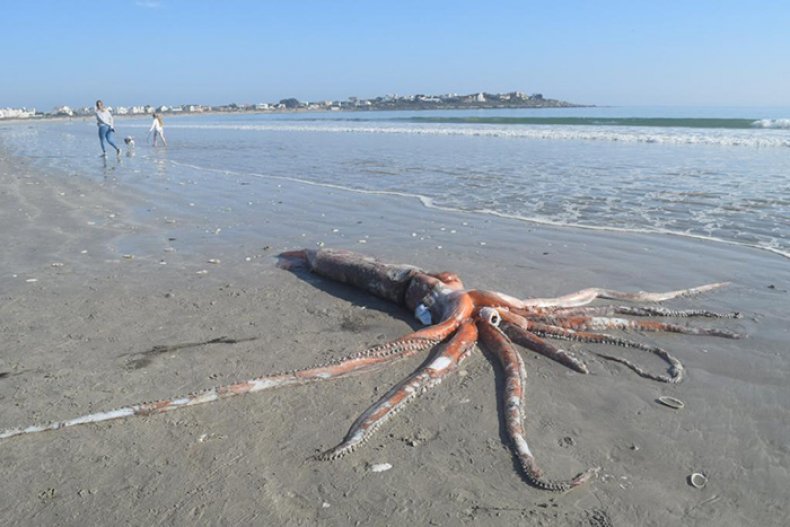 Iziko’s Marine Biology Unit transported the squid to Cape Town, where it was measured and subsampled for DNA analyses.

The giant squid is being temporarily stored, but once lockdown restrictions have lifted, the specimen will be preserved in long term storage in the wet collection of the Iziko South African Museum.

Dr. Wayne Florence, a marine biologist and curator of marine invertebrates for the Iziko Museums of South Africa, told News24: “It’s rare. In South Africa, we have had less than a handful of strandings. Surprisingly, despite our museum being almost 200 years old, our earliest stranded giant squid specimen is from 1972.

“Unlike most large animals, squid generally grow very quickly and only live for about five years. They have annual rings but these have to be dissected, and also analysis of the beak can give an indication of age.

“Since this giant squid is just over 4 meters [13 feet] in total length, based on expert opinion of other larger specimens, this beast was probably less than two years old.”

Historically, giant squid were thought to be comprised of several species. But DNA analysis of preserved museum specimens suggests they can all be attributed to a single species called Architeuthis dux.

Speaking with News24, Dr. Florence said: “Part of our mandate—the public often don’t know this—is to document Africa’s biodiversity and we do this through collecting specimens.”

This newest discovery will join 19 other specimens at the Iziko South African Museum, which is the largest repository for giant squids in Africa.

The museum’s largest giant squid specimen is around 9.3 meters in length. The squid was found stranded at Soetwater in Cape Town and is on display at the World of Water exhibition at the Iziko South African Museum.