A huge great white shark, thought to be the biggest of its kind in the world, has been filmed by divers off Hawaii. The giant fish, estimated to be six metres long and weighing two and a half tonnes, is thought to be one tagged by researchers about 20 years ago and given the name Deep Blue.

The creature, believed to be around 50 years old, and half the length of a bus, was filmed by Ocean Ramsey, a local shark conservationist.

In her video of the encounter, Ms Ramsey is seen touching the beast, something that is often criticised but she wrote that sharks sometimes “seek touch”.

“It’s not petting sharks or pushing them off to maintain a respectable space that is hurting sharks… it’s the wasteful and cruel practice of grabbing and catching sharks to cut off their fins (which slowly kills them).”

She describes how she waited patiently for the shark to approach on its way to feed on the carcass of a dead sperm whale.

But Deep Blue instead “swam away escorted by two rough-toothed dolphins… to one of shark research vessels and proceeded to use it as a scratching post, passing up feeding for another need”.

Ms Ramsey told the Honolulu Star Advertiser that they had been filming tiger sharks feeding on the whale when the shark arrived.

“We saw a few tigers and then she came up and all the other sharks split, and she started brushing up against the boat.

“She was just this big beautiful gentle giant wanting to use our boat as a scratching post. We went out at sunrise, and she stayed with us pretty much throughout the day,” she added.

Ms Ramsey also told the paper: “She looks like she may be pregnant: She’s shockingly wide.” 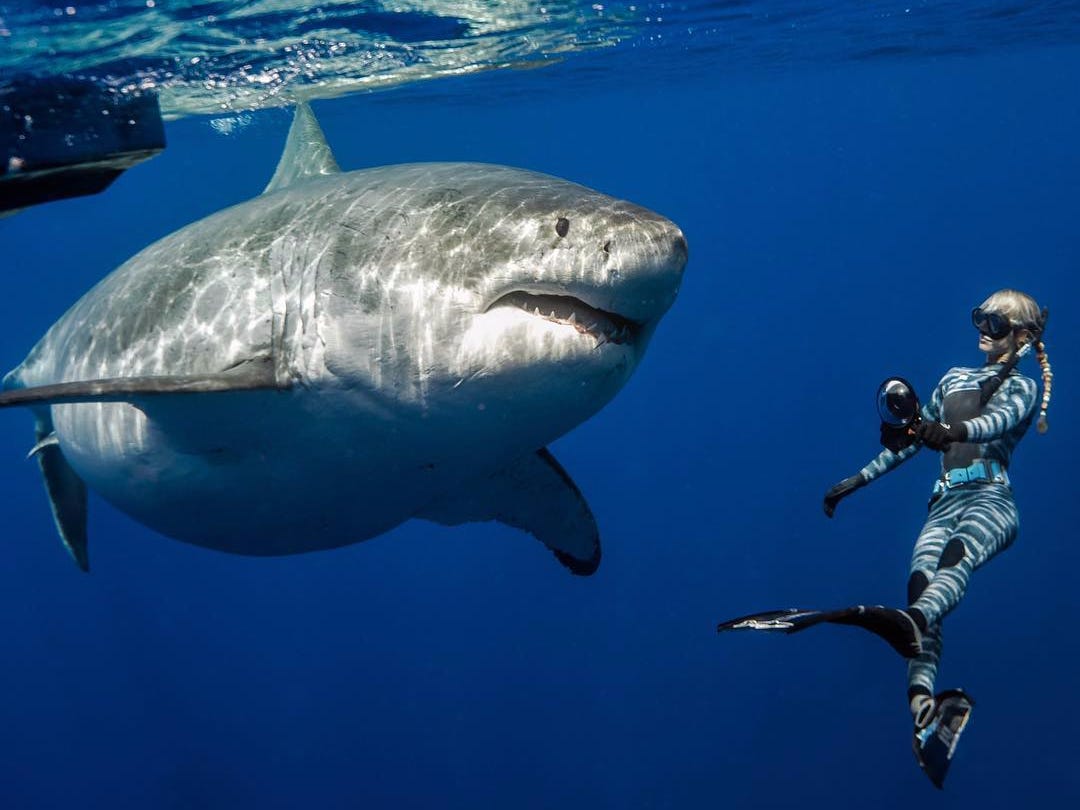 Deep Blue, “the biggest great white in the world” was about “20ft” and was “hapai,” a Hawaiian word meaning pregnant, she added.

Great whites, which usually measure an average of 4.6m, are classified as vulnerable due to illegal fishing.

They are at the top of the ocean food chain and are normally only hunted by sperm whales or killer whales.