Hand in hand with agriculture, astronomy took its first steps between the Tigris and Euphrates rivers, more than 10,000 years ago. The oldest records of this science belong to the Sumerians, who before their disappearance passed on to the peoples of the region a legacy of myths and knowledge. The heritage supported the development of an astronomical culture of its own in Babylon, which, according to Astro-archaeologist Mathieu Ossendrijver, was more complex than previously imagined. In the most recent issue of the journal Science, the researcher from the University of Humboldt, Germany, details analysis of Babylonian clay tablets that reveal how astronomers of this Mesopotamian civilization used knowledge believed to have emerged only 1,400 years later, in Europe. 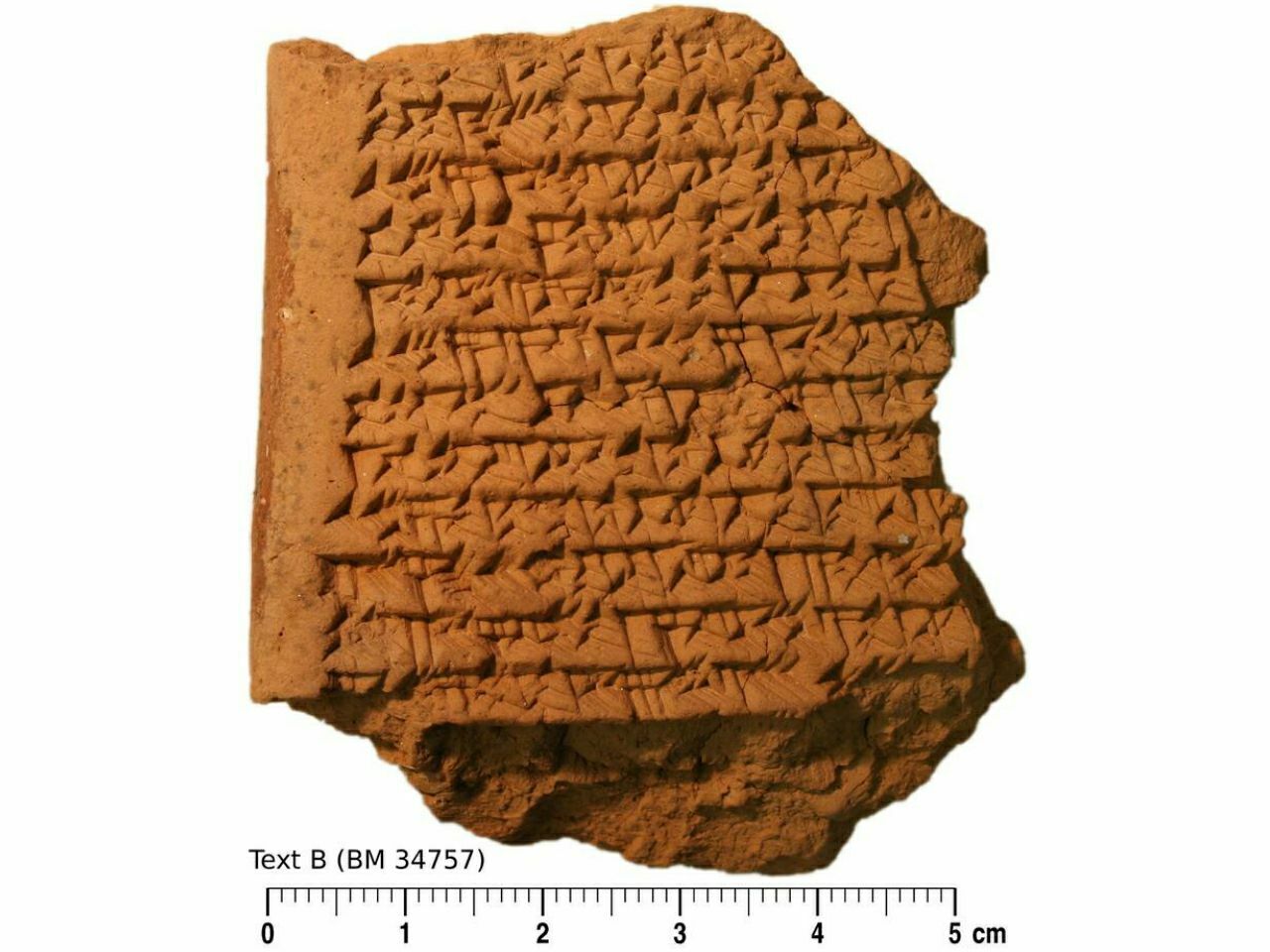 Ancient Babylonian tablets like this one show that calculating the distance Jupiter travels in the sky over time can be done by finding the area of a tr̳a̳p̳e̳zoid, showing the creators understood a concept essential to modern calculus — 1500 years earlier than historians have ever seen. © Trustees of the British Museum / Mathieu Ossendrijver

For the past 14 years, the expert has set aside a week a year to make a pilgrimage to the British Museum, where a vast collection of Babylonian tablets dating from 350 BC and 50 BC are kept. Filled with cuneiform inscriptions from the people of Nebuchadnezzar, they presented a puzzle: details of astronomical calculations that also contained instructions for constructing a tr̳a̳p̳e̳zoidal figure. It was intriguing, as the technology apparently employed there was thought to be unknown to A̳n̳c̳i̳e̳n̳t̳ astronomers. 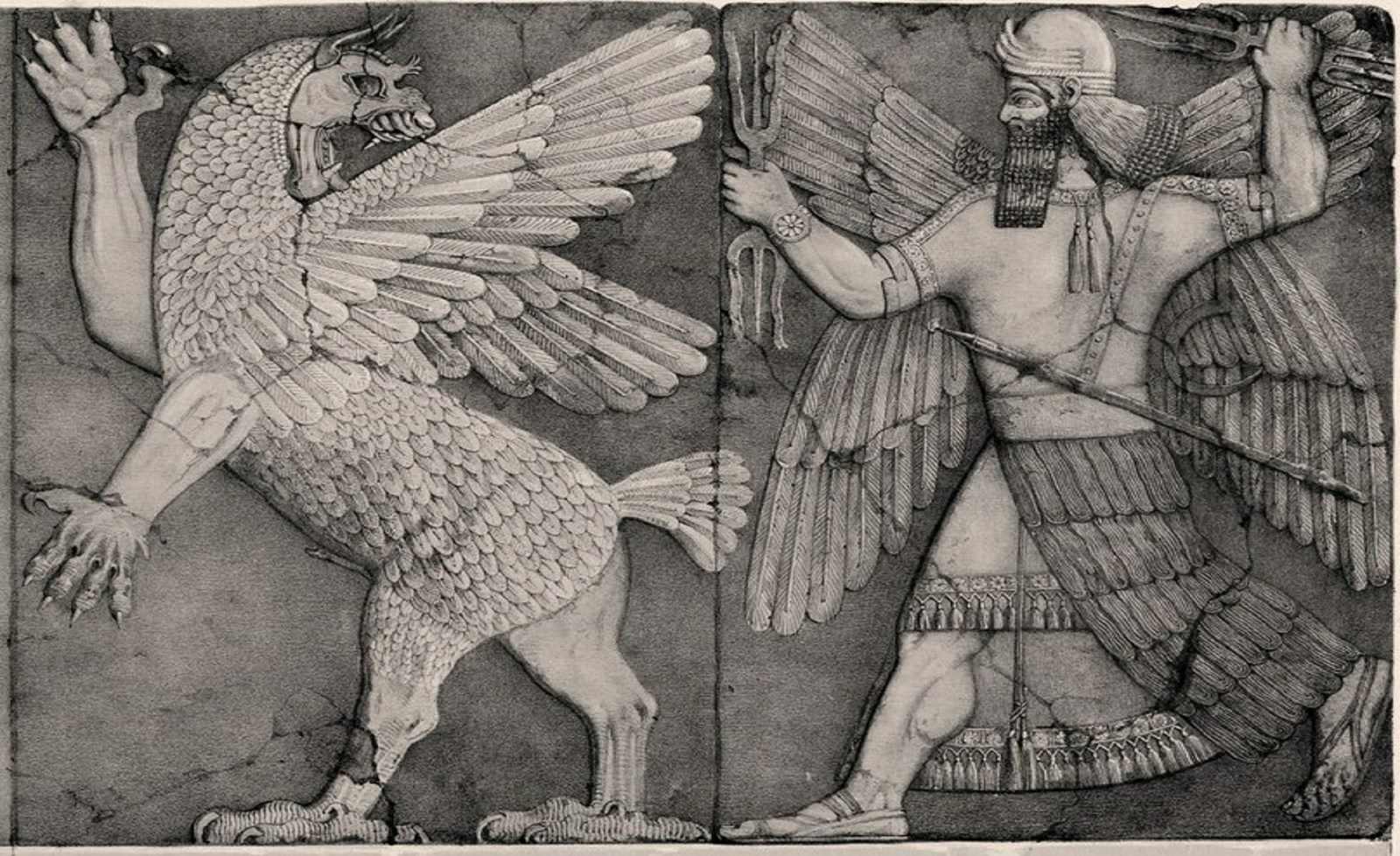 However, Ossendrijver discovered, the instructions corresponded to geometric calculations that described the movement of Jupiter, the planet that represented Marduk, patron god of the Babylonians. He then found that the tr̳a̳p̳e̳zoidal calculations inscribed in stone were a tool for computing the giant planet’s daily displacement along the ecliptic (the Sun’s apparent trajectory as seen from Earth) for 60 days. Presumably, astronomical priests employed in the city’s temples were the authors of the calculations and astral records. 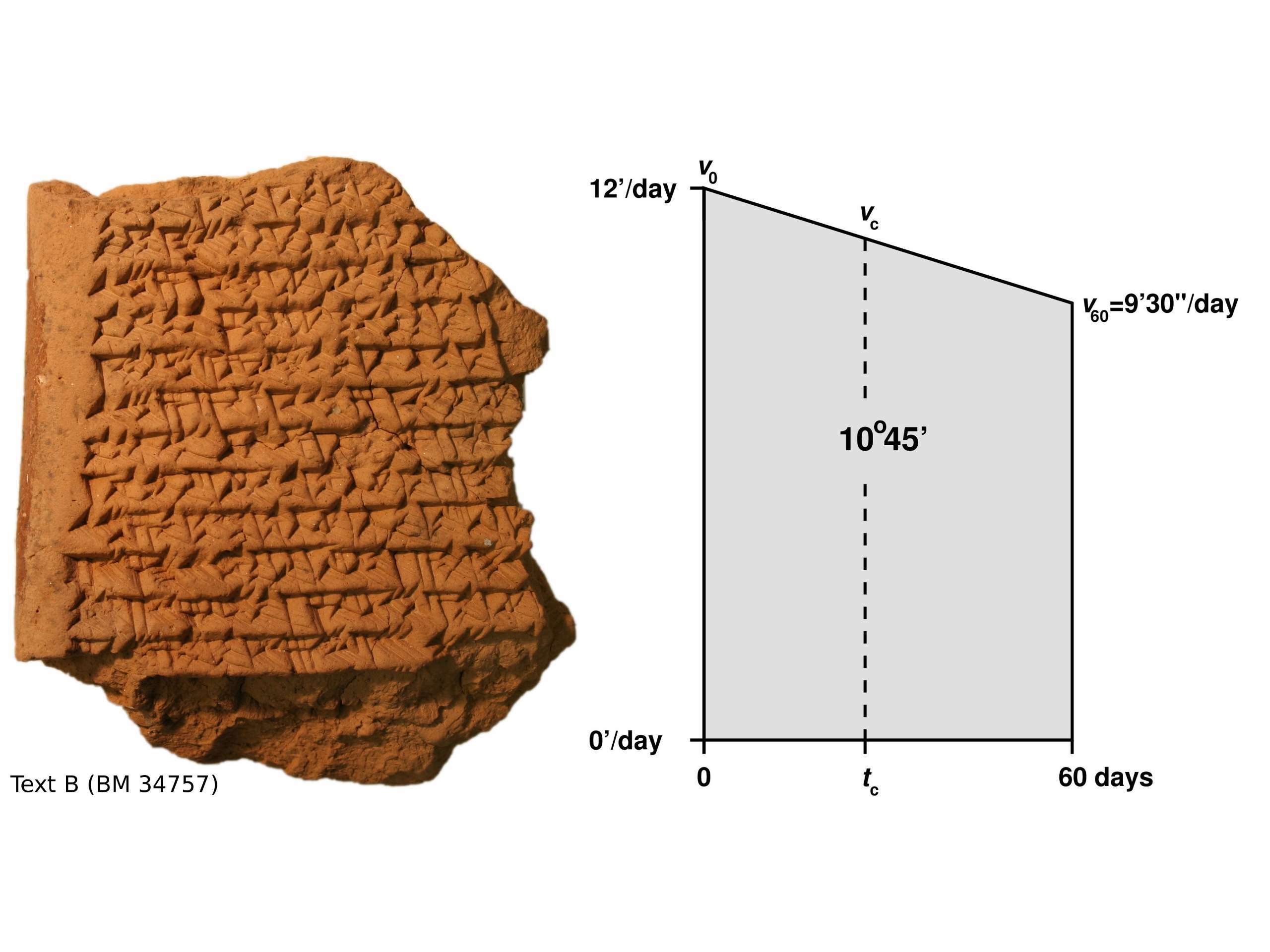 The distance travelled by Jupiter after 60 days, 10º45′, is computed as the area of the tr̳a̳p̳e̳zoid whose top left corner is Jupiter’s velocity over the course of the first day, in distance per day, and its top right corner is Jupiter’s velocity on the 60th day. In a second calculation, the tr̳a̳p̳e̳zoid is divided into two smaller ones with equal area to find the time in which Jupiter covers half this distance. © Trustees of the British Museum / Mathieu Ossendrijver

“We didn’t know how the Babylonians used geometry, graphics and figures in astronomy. We knew they did that with math. It was also known that they used mathematics with geometry around 1,800 BC, just not for astronomy. The news is that we know that they applied geometry to compute the position of planets” says the author of the discovery.

Physics professor and director of the Brasília Astronomy Club, Ricardo Melo adds that, until then, it was believed that the techniques used by the Babylonians had emerged in the 14th century, in Europe, with the introduction of the Mertonian Average Velocity Theorem. The proposition states that, when a body is subjected to a single constant non-zero acceleration in the same direction of motion, its velocity varies uniformly, linearly, over time. We call it Uniformly Varied Movement. The displacement can be calculated by means of the arithmetic mean of the speed modules at the initial and final instant of measurements, multiplied by the time interval that the event lasted; describes the physical.

“That is where the great highlight of the study lies” continues Ricardo Melo. The Babylonians realized that the area of ​​that tr̳a̳p̳e̳ze was directly related to the displacement of Jupiter. “A true demonstration that the level of abstraction of mathematical thinking at that time, in that civilization, was far beyond what we supposed,” says the expert. He points out that, to facilitate the visualization of these facts, a system of coordinate axes (Cartesian plane) is used, which was only described by René Descartes and Pierre de Fermat in the 17th century.

So, says Melo, even though they did not make use of this mathematical instrument, the Babylonians managed to give a great demonstration of mathematical dexterity. “In summary: the calculation of the tr̳a̳p̳e̳zium area as a way to determine the displacement of Jupiter went far beyond Greek geometry, which was concerned purely with geometric shapes, as it creates an abstract mathematical space as a way to describe the world we live in.” Although the professor does not believe that the findings can directly interfere with current mathematical knowledge, they reveal how the knowledge was lost in time until it was independently reconstructed between 14 and 17 centuries later.

Mathieu Ossendrijver shares the same reflection: “Babylonian culture disappeared in AD 100, and cuneiform inscriptions were forgotten. The language died and their religion was extinguished. In other words: an entire culture that existed for 3,000 years is over, as well as the acquired knowledge. Only a little was recovered by the Greeks” notes the author. For Ricardo Melo, this fact raises questions. What would our civilization be like today if the scientific knowledge of antiquity had been preserved and passed on to subsequent generations? Would our world be more technologically advanced? Would our civilization have survived such an advance? There are a multitude of questions we can ask the teacher reasons.

This type of geometry appears in medieval records from England and France dating to approximately 1350 AD One of them was found in Oxford, England. “People were learning to calculate the distance covered by a body that accelerates or decelerates. They developed an expression and showed that you have to average the speed. This was then multiplied by time to get the distance. At the same time, somewhere in Paris, Nicole Oresme discovered the same thing and even made graphics. That is, he designed the speed” explains Mathieu Ossendrijver.

Video A History of Our Knowledge of the Solar System Man Claims He ‘Went To Hell’ For 23 Minutes The Current Concept of Time Was Created by the Sumerians 5,000 Years Ago!