The nests, which look like a cluster of hexagonal cells, were built by several species of paper wasp, all belonging to the genus Polistes. The wasps seal off the underside of the hexagonal cells with so-called cocoon caps made of silken fibers, which protect the growing larvae within the nest. And for reasons yet unknown, these cocoon caps emit a strong greenish-yellow glow when exposed to UV light between 360 and 400 nanometers in wavelength.

“We were very surprised to find such strongly fluorescent biomatter,” senior author Bernd Schöllhorn, a professor of chemistry at the University of Paris, told Live Science in an email. 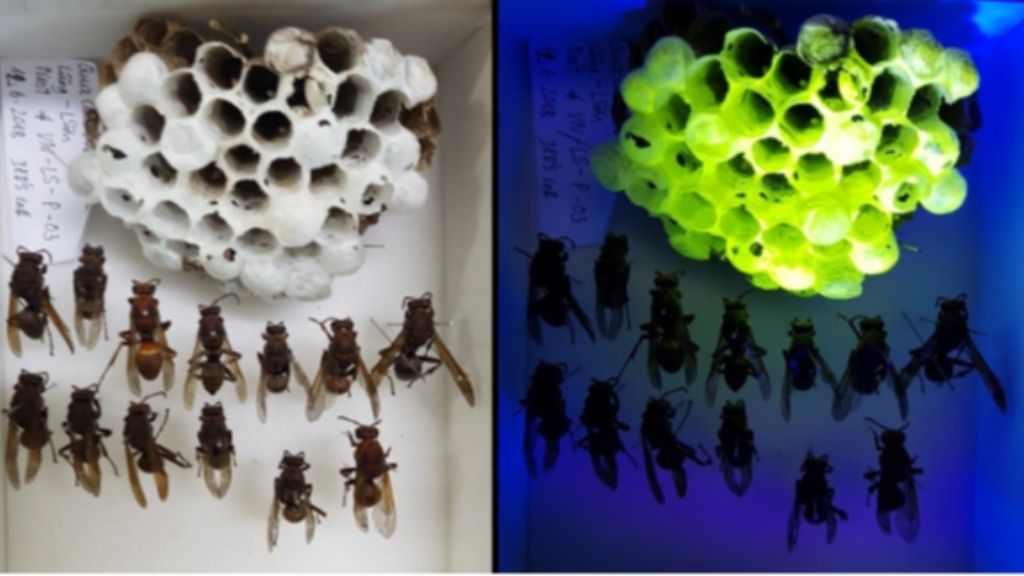 The team initially set out to discover unknown fluorescent insects in tropical rainforests, so they’d come equipped with UV LED torches. “We were not searching for wasp nests in particular,” Schöllhorn said. “To our knowledge, this phenomenon has not been observed in the past, neither by scientific researchers nor by any photographers.”

When exposed to white light, the nest cocoon caps appear bright white. Their verdant fluorescence begins to appear under normal daylight, and at night under a UV torch, the bright green glow of the nests can be seen up to 65 feet (20 meters) away, the authors wrote in their report, published Tuesday (Aug. 24) in the Journal of the Royal Society Interface.

The authors compared the nests of these Vietnamese wasps to those of two other Polistes species: one from the Amazonian rainforest of French Guiana and one from a temperate region of southern France. They found that all the wasps’ cocoon caps showed similar fluorescent properties, although their glows varied in both intensity and the range of UV light that elicited the strongest reaction.

Having discovered these mysterious glowing nests, the researchers now wonder whether the fluorescence serves any specific purpose for the wasps. On this front, they have several ideas. 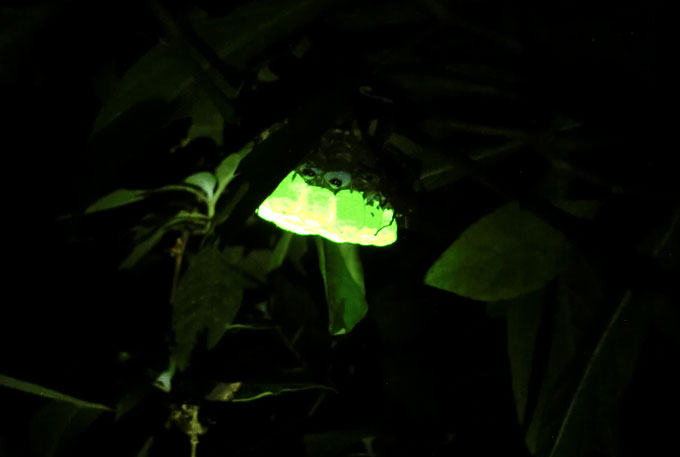 It may be that the glowing nests act as homing beacons for wasps flying back to their nests at twilight, or perhaps wasps of different species use subtle variations in fluorescence to differentiate their colonies’ nests from those of nearby colonies. Or it may be that the fluorescent cocoon caps protect wasp larvae from harmful UV rays that would otherwise disrupt the larvae’s development.

Past studies suggest that wasp larva development is heavily influenced by the relative length of day and night; therefore, the glowing cocoon caps may help to control how much daylight reaches the larvae as they grow into pupae, the authors wrote. “The last hypothesis is my favorite,” Schöllhorn told Live Science.

The Vietnamese Polistes species usually breed during the rainy season, between June and August, when cloud cover blocks a significant amount of visible light from reaching the nests but still lets a fair amount of UV light slip through. By setting the cocoon caps aglow, this residual UV light may increase the wasp larvae’s overall light exposure during development, thus influencing how they grow, the authors wrote in the study.