Is it irrational to believe in U̳F̳O̳s over Alaska? Professor Emeritus of Public Health Lawrence Weiss posed the question during a presentation last week and gave a simple answer: no, reports thenorthernlight.org.

“I think there’s definitely something going on,” Weiss said. “There’s trillions of planets out there that could be habitable. It seems to me that it’s almost inconceivable that we aren’t being visited by a̳l̳i̳e̳n̳s from other parts of the universe.”

Weiss was a professor at UAA in various positions for nearly 20 years before retiring in 2004. During his time at the university, he taught both public health and sociology, founded the Master of Public Health program and assisted in creating the first Alaska Native studies minor. Although his field of study was not astronomy, Weiss’ interest in space led him to pursue it further. 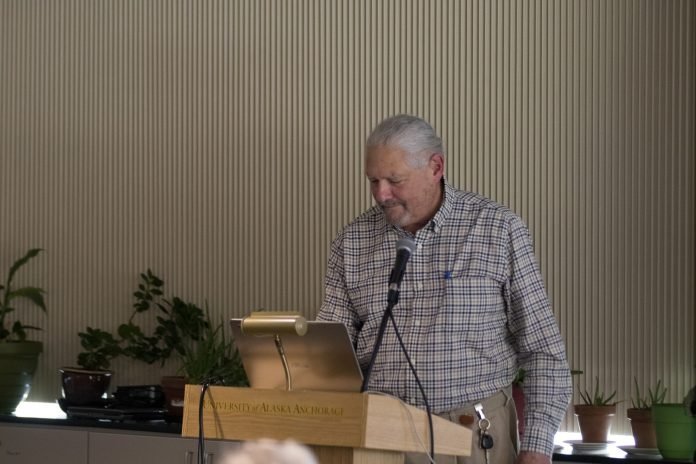 “I have a Ph.D. but it’s not in U̳F̳O̳logy,” he said. “It’s mostly a hobby, but I do have certain beliefs.”

Weiss’ interest in flying saucers and e̳x̳t̳r̳a̳t̳e̳r̳r̳e̳s̳t̳r̳i̳a̳l̳ life began at a young age. He credits his father for inspiring him to look further into the subject.

“My dad was a very strange person,” he said. “He had a bunch of books around the house about U̳F̳O̳s. Reading those books and looking at the pictures as a kid was the starting point for me.”

With the rise of the internet, Weiss’ hobby was able to grow. Access to databases, documentation of U̳F̳O̳ sightings and filmed talks about the subject expanded his knowledge and further convinced him of the reality of life outside of Earth.

“The best documented cases of a prolonged encounter between a commercial airline and multiple U̳F̳O̳s happened right here in Alaska,” according to Weiss.

The encounter took place on Nov. 17, 1986 when Japan Airlines flight 1628 flew over eastern Alaska on its way from Paris to Tokyo.

The crew witnessed two large rectangular objects rise from the clouds, causing the cabin of the aircraft to heat up, according to a video of the event. The flight captain, Terauchi, reported the object as a U̳F̳O̳ and was consequently moved to a desk job and not reinstated as a pilot until years later.

The incident was investigated for months afterward and the Federal Aviation Administration concluded that there was not enough information to confirm that the object was a U̳F̳O̳. Weiss believes that this event was covered up because the government knew it was out of their hands.

Another resource with extensive evidence of U̳F̳O̳s is Stanton Friedman, a retired nuclear physicist and U̳F̳O̳logist.

Friedman has participated in U̳F̳O̳ research since the 50s and gone on to write numerous books and articles, publish videos and CDs and give many talks on the subject. According to Weiss, Friedman is “the most credible and experienced” person out there in regards to e̳x̳t̳r̳a̳t̳e̳r̳r̳e̳s̳t̳r̳i̳a̳l̳ activity.

Between the Alaskan U̳F̳O̳ encounter, Friedman and the countless other resources he’s come across, Weiss believes that all the evidence of a̳l̳i̳e̳n̳s is there, you just have to go look for it.

“A lot of people who denigrate this stuff don’t know about the existence of the evidence out there,” he said. “These are not goofy tinfoil hat people; they are trained observers and extremely credible sources.”