In three years, this is the second time that in northeastern New Mexico, pilots of passenger planes have seen unidentified objects flying at high speed and at very high altitudes.

On February 21, 2021, the pilots of the American airline American Airlines, who were on an Airbus A320 passenger liner, were flying between Cincinnati and Phoenix (Arizona) and saw something very strange in the sky.

According to The Drive, the ship’s crew described the object as “long and cylindrical, very much like a cruise missile.” The object was moving at a very high speed and was at a dangerously close distance to the aircraft.

By the way, the liner flew at an altitude of almost 11 km and moved at a speed of 400 knots (740 km per hour). At the time of the U̳F̳O̳ sighting, the plane was flying over a distant northeastern corner of New Mexico, near the town of Des Moines.

U̳F̳O̳ sightings by airliner pilots became known only thanks to the experienced researcher and radio interceptor Steve Douglas, the owner of the blog “Deep Black Horizon“.

He accidentally intercepted a strange radio message in which pilots reported sighting of a long cylindrical object in the sky.

The conversation began like this: “Do you have any targets here? Something just happened right above us – I hate to say that, but it looked like a long cylindrical object that almost looked like something like a cruise missile – it was moving very quickly right above us.” 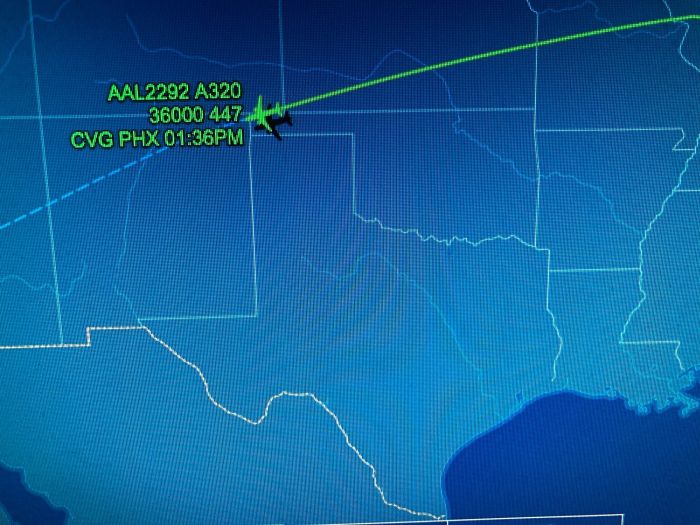 By the way, the specified liner flew safely to its destination (Phoenix) and nothing unusual happened to it further. Douglas also said there was no significant military aircraft presence in the area, according to ADS-B (a technology that allows pilots and air traffic controllers to observe the movement of aircraft).

The Drive reporters attempted to contact the US Federal Aviation Administration and American Airlines to verify the reality of the incident, and soon received a response from American Airlines.

“After speaking with our flight team and receiving additional information, we can confirm that this broadcast originated from American Airlines Flight 2292 on February 21st. If you have further questions, we recommend that you contact the FBI.

“The pilot reported seeing an object over New Mexico shortly after noon local time on Sunday, February 21, 2021. FAA air traffic controllers did not see any objects in the area on their radars.”

The reference to the FBI supposedly means that the bureau is currently investigating the incident.

New Mexico is home to the White Sands Missile Range and several military bases, so there is an unofficial version that the pilots may have seen a missile from a secret military test that deviated from its intended course.

However, it seems unlikely to many that civil aircraft would not be alerted to the incident. Another theory is that the crew of the plane saw a test of a secret military fighter jet (cylindrical?). But this version was also met with skepticism, as it also implies that the military would not launch the plane in the same area where civilian passenger flights take place.

And finally, the most curious thing. Three years ago, in almost the same area, the crews of two planes at once – Learjet 35 and Airbus A321 – observed a large U̳F̳O̳ flying at an altitude of about 12 km.

The fact that two strange and very similar encounters took place in the same locality, almost three years apart, is rather surprising for a coincidence.