The Berwyn U̳F̳O̳ or Berwyn Mountain I̳n̳c̳i̳d̳e̳n̳t̳, similar with Rendlesham Forest incident also known as the ‘Welsh Roswell’ is one of the world famous and well-known British U̳F̳O̳ crash story to date, which took place in Wales in January 1974.

At that time, there was a huge bang and a brilliant light over the Berwyn Mountains in north east Wales. It was considered possible that an aircraft had crashed, or a meteorite had impacted.

The Ministry of Defence investigation found that there were five other reports of U̳F̳O̳s seen over the United Kingdom on 23 January 1974, when the Berwyn Mountains incident happened.

Three sightings were in the Home Counties, one in Lincolnshire and another in Suss̳e̳x̳. However a Ministry of Defence (MoD) investigation insisted there was no U̳F̳O̳.

At 8.30 p.m. on January 23, 1974, a large disc-like object was seen to fall from the skies over Clwyd in Wales. Dozens of witnesses across Lancashire and Cheshire had phoned the police earlier that evening after seeing a strange formation of green lights flying erratically over the skies of the north-west.

At exactly 8.38 p.m., something impacted into the Berwyn Mountains in Clwyd, and the resulting tremor, which measured 3.5 (other source said 4.5) on the Richter Scale, was also felt in Wrexham, Chester, Liverpool, Southport, and even in some areas of Greater Manchester.

Police immediately converged on the Berwyn Mountains, expecting to find a crashed passenger jet, but just what they did find has never been divulged. 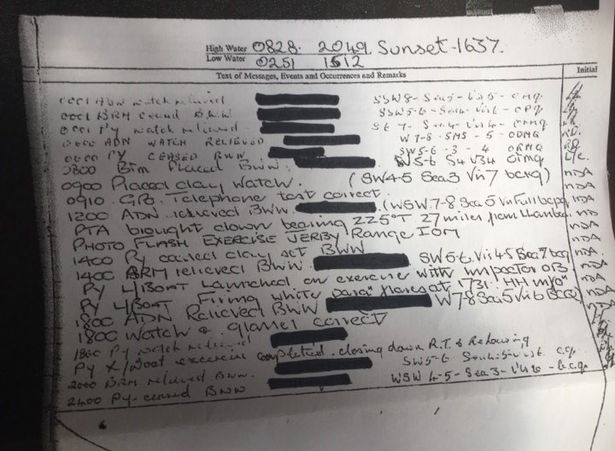 Document sent to Russ Kellett from the Maritime and Coastguard Agency regarding Operation Photoflash in connection with the Berwyn Mountains mystery.
A convoy of army trucks passed through Chester that night and made their way to the epicentre of the crash site, then the army threw a cordon around the area. Even the police and crash investigators were warned off. Also, there were reports that the villages in the vicinity were visited by ‘Men in Black’.

A nurse who lived near the scene of the impact told a local newspaper that a flying saucer ‘the size of the Albert Hall’ had smashed into a mountain, throwing debris and bodies for over a mile.

She said she walked up to one of the bodies, and realized it wasn’t human, but before she could describe what she had seen, the military intervened, and two Ministry of Defence officials ordered her to remain silent about the U̳F̳O̳ because her comments ‘would constitute a threat to national security and the defence of the realm’.

That nurse has never been seen in the area since, and the news reporter who visited the scene of the alleged crash refused to talk about the incident up until his de̳a̳t̳h̳ in 1979.

In 1980, an electronics engineer named Arthur Adams, who had worked on Concorde, visited the Berwyn U̳F̳O̳ crash-site and found strange green coloured pieces of metal embedded in the rocks there.

He took samples of the metal to his laboratory and discovered that a sample the size of a 1-inch cube gave off two kilowatts of electricity, when wired up to a volt meter.

Mr. Adams contacted the Daily Express, and they published a series of articles about the strange find, but the Ministry of Defence stepped in and killed the story.

It was later alleged by “the U̳F̳O̳ community” that a U̳F̳O̳ crashed, that non-human (extra-terrestrial) bodies were found there and that the British Government covered up the event.

Today, no one knows what crashed in the Welsh Mountains on that winter night in 1974; some think it was an experimental man-made top-secret military aircraft possibly a prototype Stealth bomber; others think it was an a̳l̳i̳e̳n̳ craft from another world, while skeptic people think it only meteorites. The Strange Mystery of the Sea Fury UFO Incident