The modern U̳F̳O̳ era began on June 24, 1947, when Kenneth Arnold sighted nine objects in the sky near Mount Rainier,Washington. Arnold was a 32-year-old businessman and pilot who at the time was searching for a downed transport plane.

He initially thought the objects were jets but was unable to discern any tails at the ends of what he at the time thought were airplane fuselages.
Looking more closely, he noted that all but one of the objects looked like flat disks. The story of Arnold’s sighting was reported in newspaper articles almost immediately and then the term “flying saucers” was first coined by headline writers for this story. 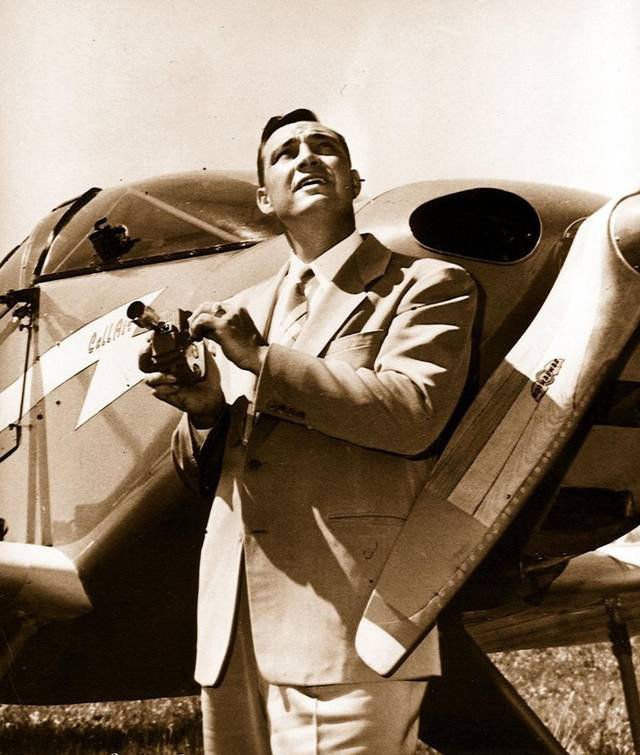 Kenneth Arnold
On Tuesday, June 24, 1947, Arnold told the East Oregonian reporters that he had observed, during a trip in his own plane between Chehalis and Yakima, a chain of nine peculiar-looking aircraft in the region around Mt. Rainier, each one about the size of a C-54.

“They flew close to the mountaintops, in a diagonal chainlike line,” he said later. “It was as if they were linked together.” The disks appeared to be twenty to twenty-five miles away and moving at fantastic speed. Arnold’s estimate was twelve hundred miles an hour.

“I watched them about three minutes,” he said. They were swerving in and out around the high mountain peaks. They like a pie pan, and so shiny they reflected the sun like a mirror. I never saw anything so flat.” Their fronts were circular, and their backs were triangular in the rear—but one of them looked crescent- shaped. They were traveling at least twice the speed of sound, Arnold guessed.

In the last days of June 1947, breaking the sound barrier was still a dream and the subject of much speculation and discussion among pilots. Arnold’s first thought was that they were some kind of new secret jets or guided missiles. But there was also another possibility that came to his mind after a moment: Soviet aircraft, as 1947 was a threshold year in the developing Cold War. 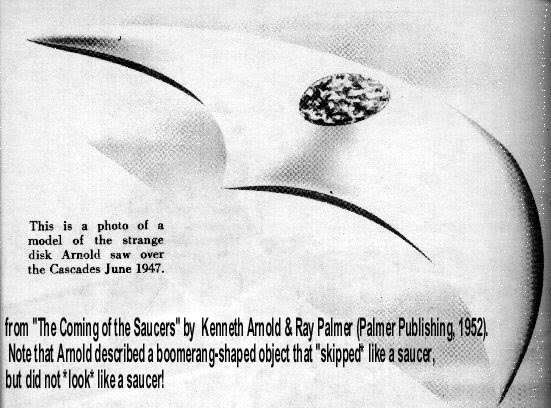 At Yakima, he told his story to pilots who remarked that the craft were bound to have been guided missiles from Moses Lake, Washington. Arnold recalled that “I felt satisfied that that’s probably what they were. However, I had never heard of a missile base at Moses Lake.”

When he landed at Pendleton, Arnold learned that his story had arrived ahead of him. The Yakima pilots had telephoned Pendleton to notify them of Arnold’s arrival and had related his adventure. (Contrary to what has often been written in U̳F̳O̳ books, there were no reporters among these people).

After discussing this with them and reaching the conclusion that these missiles were something out of the ordinary, Arnold—“armed” with his maps and calculations so as to give “the best description I could”—repaired to the local FBI office. He found the office shut.

Not having any luck with the FBI, Arnold decided to look up the journalists from the East Oregonian. One consideration in particular seems to have pushed him. As he explained to them, he had met, probably at the Hotel Pendleton where he was staying, a man from Ukiah, Oregon, who had said that he had seen a similar formation of craft there.

Before leaving Pendleton, then, he went to the offices of the East Oregonian. He told Nolan Skiff and Bill Bequette about his adventure. Arnold described them as moving “like a saucer if you skipped it across the water.” Skiff, skeptical to begin with, was rapidly convinced of Arnold’s honesty. So was Bequette. The latter sent off, as he always did with local news, an Associated Press dispatch. 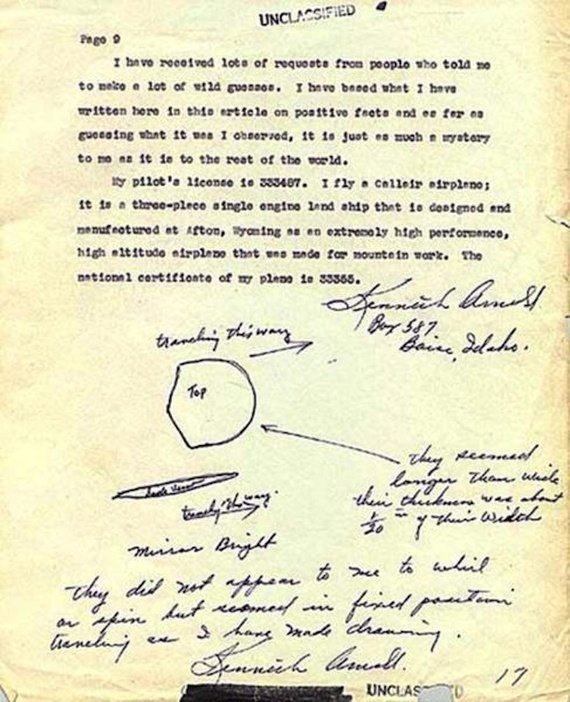 As soon as Arnold’s story became known, sightings of flying disks proliferated. Starting from June 26 and over the days following, there were hundreds, perhaps even thousands, of newspaper articles devoted to flying disks.

Most of the time saucers were explained away by scientists and military experts who asserted that “the observers just imagined they saw something, or there is some meteorological explanation for the phenomenon.” Statements quoted in these stories are filled with expressions like “mass hypnosis” and “foolish things.”Saucers were compared to the Loch Ness Monster.

The saucer craze created such a turmoil that the U.S. Army Air Force began an investigation in the early days of July. At the request of the Air Materiel Command, Arnold produced a written report detailing his sighting that he sent to Wright Field in Dayton, Ohio.

A few days later, Arnold received a visit from two members of the military, Lieutenant Frank M. Brown and Captain William Davidson, who came from Hamilton Field in California. Brown and Davidson’s aim was to bring back an account from—as well as an opinion about—Arnold.

To this end, the enquirers, upon returning to their base, composed a report on what they had gathered. This report consists primarily of the details of the sightings and their impressions of the personalities of the witnesses.

In 1948 Arnold’s report landed on J. A. Hynek’s desk. Hynek was an astronomer the Air Force had asked to study the reports so as to avoid any possible confusion with astronomical phenomena. Hynek’s conclusion was that Arnold had seen some kind of aircraft. But Arnold heard nothing back about the eventual whereabouts of his report. He had to try other strategies to find a solution to his sighting. 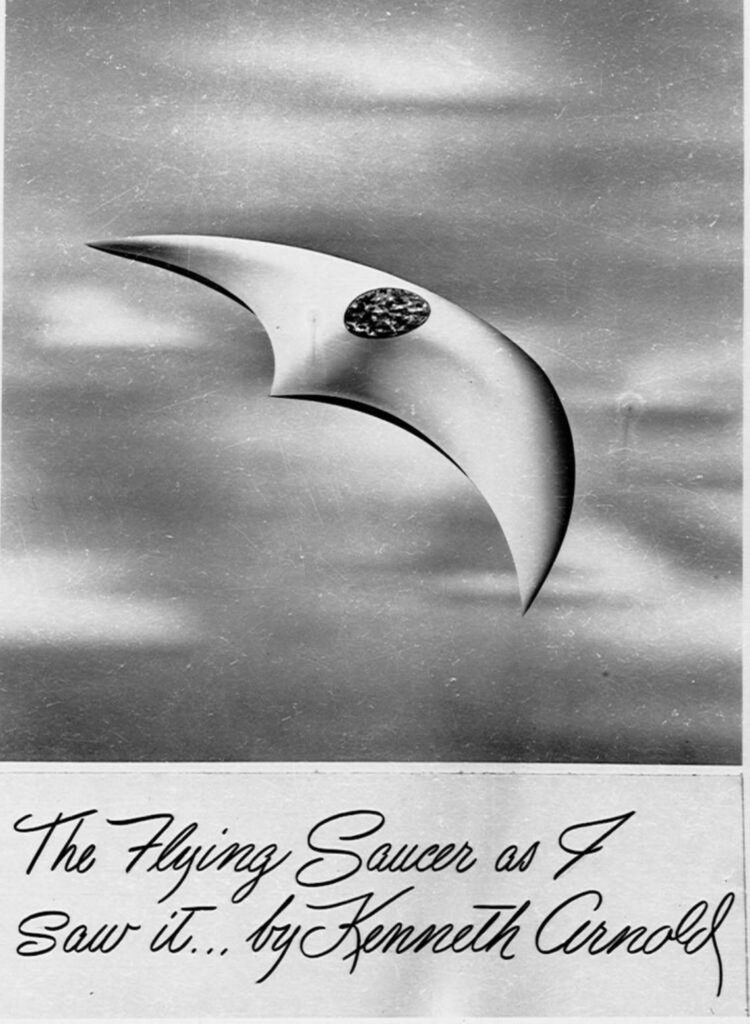 He accepted an invitation from a Chicago editor named Ray Palmer to go to Tacoma, Washington, and investigated another sighting. Ray Palmer was the editor of a pulp magazine called Amazing Stories. The case Arnold investigated turned out to be a crude hoax, at least from the point of view of the FBI investigators.

Arnold called in the two military investigators who had interviewed him earlier (they asked him to contact them if he heard anything interesting). Afterward, Brown and Davidson died in an airplane crash. From then on, the saucer story followed different paths.

In January 1948 the newly formed U.S. Air Force launched Project Sign to investigate the sightings. This project, located in the Technical Intelligence Division at Wright-Patterson Air Force Base, was classified as secret, and the public had access only to the press reports.

The Kenneth Arnold affair is a challenge for social history and sociology. Unfortunately, it has been only randomly studied by historians. Most historiographical works on U̳F̳O̳s, even if they are more sophisticated, have been conducted by amateurs who are not connected with the academic world.