The Nomoli Figurines is the small figure of stone that has been found by local people when searching for diamonds in Sierra Leone, West Africa. This statues is the most unusual, outstanding and oldest Nomoli artifact. The age is estimated of 17.000 years.

When it was found a certain noise was recognized when it was moved. A sculptor cut out one piece of the object. He discovered a hole and also a very small ball of metal.
So where do those mysterious stone figures come from? Are they relics of a foreign and sunken culture? Did the unknown creator have had a profound purpose? 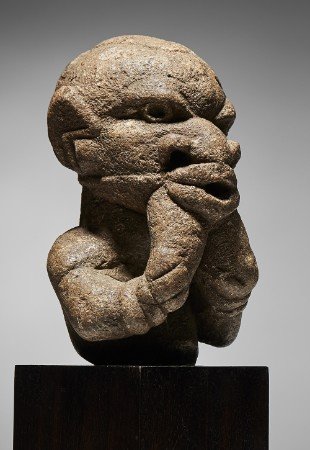 Scientists, especially ethnologists, developed numerous theories about those figures. They do not have the same opinion because the origin and the purpose of the sculptures are unexplained.

Myth and legend of Western Africa says that in A̳n̳c̳i̳e̳n̳t̳ times a people of angels lived in heaven. As a cause of bad behaviour God banned them from the divine empire.

To punish the angels he transformed them into men and sends them to Earth. The Nomoli Statues are said to be a reminder of those once divine creatures. The faces of the Nomoli figures show typical characteristics: The statues are made of different sorts of stone, soft materials as well as hard granite.

They have a very big nose like an eagle with nostrils, a big mouth, sometimes showing teeth and significant eyes. Their skulls are flat. The objects were about 40cm tall; their origin is unknown.

The dating of the Nomoli still is a problem. According to the geological stratums in which they were found, they must be 2.500 to 17.000 years old. The figures that laid in deeper stratums were raw and simple made. The sculptures have various poses and expressions.

The majority are human figures, some riding on horses, most of them sitting with crossed legs or on their knees. Some put their faces in their hands. Sometimes the figures have weapons or a shield.

The natives often call the figures “men in stone”. But some see them as guardian god and god who brings luck and they put them on their fields to guard and increase the harvest.

Some native tribes like the Mande and Kissi in Guinea put such statues of Nomolis on their fields. So a “vegetation cult” developed that is seen in connection with de̳a̳t̳h̳. They put the stones on their fields and made them sacrifices if the harvest was rich. If harvest was bad the Nomoli have been punished ritually and whipped.

Angelo Pitoni, an Italian geologist, deals with the Nomoli statues. He took some organic samples from the places the figures were found. To define the age different materials have been taken, e.g. founds made of wood (a stick that was found in a depth of 10 meters).

Prof. Giorgio Belluomini from University of Rome also examined the artifact and estimated its age of 400 to 500 years. In 1992 the object was analysed three times and the C-14-dating showed an age of 2470 years, /- 50 years.

Until that day one thought that the only civilization in Western Africa was the so-called Afro-Portuguese civilization, about 400 years old. But the Nomoli objects do not fit this conception.

Also there is some mysterious stones that are connected with the strange Nomoli figures called the “Sky Stones”. They were also found in Sierra Leone in a great quantity. 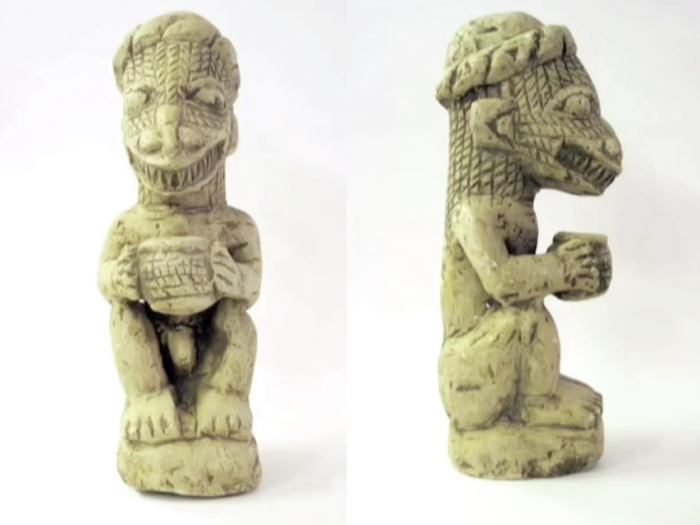 Based on local legend, it says that the part of the sky the Nomoli lived in, turned into stone. Then it split and fell down on earth in huge pieces of rock. The stars that were in this part of the sky have also been destroyed and rests came to earth. Sparkling rests of those stars are the diamonds.

Natives showed excavation-places where in a depth of 40 m to 40 cm numerous blue stones were found. They had different sizes. Their colour, similar to Cobalt, some pieces have been analysed in different laboratories in the whole world.

The results based on the analysis made by the Institute for Precious Stones of the Museum of Natural History have been astonishing: It showed that the stones were made artificially, the pulverized samples consist of 77% oxygen, 20% carbon and lime, silicon and traces of iridium. However, there is no iridium on Earth, unless it was brought in from space by a meteorite.