In February of 1953, miners John Van Black and John Allen were working outside their titanium mine near Brush Creek, California, when they saw a “metallic saucer” hovering over the area of the mine. During the next four weeks, the saucer returned four times.

It was obvious to the men that the object was interested in their titanium mine. On May 20, Black saw the familiar-looking saucer hovering about 200 feet above the creek next to the mine.
After the object left, Black found several strange, five-inch footprints around the area. One month later, on June 20, Black approached the area when he saw what he thought was a small child with a bucket.

Looking closer, he saw it was a small man wearing green pants, unusual shoes, a jacket, and a green cap. He was very pale and had black hair. Says Black, “He looked like someone who had never been out in the sun much.” Black watched as the man scooped up water with a strange coneshaped bucket.

Black described the observed occupant as “about the size of a midget” and said he was very broad shouldered. He wore “something like a parka” (a piece of clothing which covers the head as well as the trunk of the body) and his arms and legs were covered with a heavy, tweed-like cloth fastened at the wrists and ankles with “buckles or ties of some kind.”

The figure then heard Black approaching and ran back into the saucer, which promptly took off and disappeared. Black reported the event to the police. 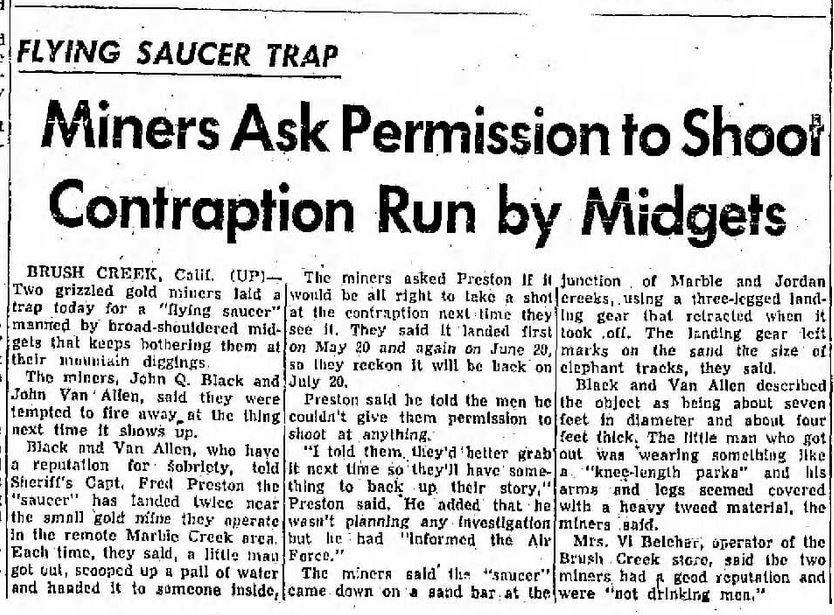 The available details, however, are as follows. In each instance, on May 20 and June 20, the object landed at almost exactly 6:30 p.m. The “little man” got out, scooped up a bucket of water in a shiny pail, and handed it to someone inside the craft.

When the little man saw Black, he hurriedly jumped into the “saucer” and it took off at high speed, making a hissing sound which resembled the “sound of steam coming out of a boiler.”

The saucer, silver in color, appeared to be about 7 feet in diameter, 6 feet thick, with a tripod landing gear, and a “little dome” in front. It landed on a sand bar in Brush Creek and Black was within 50 yards of the saucer on each occasion.

Whatever Black told the Sheriff on June 24 happened to come to the ears of the Press and received a national attention. Newspapers generally ridiculed the story, but because the saucer might return on the 20 of the next month, on July 20, more than two hundred people arrived in the course of the day to see the saucer and its pilot land again.

Among the curious and Press people were also two cameramen of the Movietone films of United Press and Telenews Corporation with their heavy cameras, one George T. Wolfer, a sales manager of Milwaukee equipped with a modified Bolex cinema camera which allowed shooting in three dimensions and color. 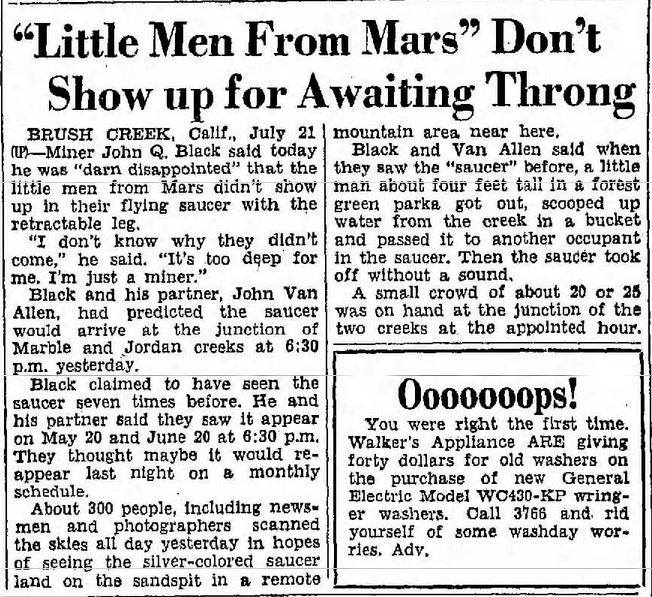 Black was interviewed and recorded for KXOC, the Chico local radio station. There was also an archer who planned to knock the space visitor unconscious with pointless arrows to capture him, but other people dissuaded some, recommending a friendlier approach.

Lastly, two telepaths had come to read the thoughts or communicate with the space visitor. Crowds of people showed up at the mine, hoping that the UFO would return again. Unfortunately, it never did, and the Brush Creek UFO landing remains a mystery. It seems clear, however, that the UFO was interested in the titanium mine.