Dinosaur tracks have been found on the riverbed of the Paluxy River in Glen Rose, Texas for several years, but controversially, there were human tracks also found in the same strata of rock, which were widely publicized as evidence against the geological time scale and in favor of young-Earth creationism.

Many of these were found and admitted to be frauds that had been carved by the locals, but some tracks which were in an area submerged by the river, have been found to be genuine. Did dinosaurs and human beings coexist?
No, according to paleontologists, who maintain that dinosaurs and people missed each other by over sixty million years. The Paluxy River is a river in the U.S. state of Texas. It is a tributary of the Brazos River. 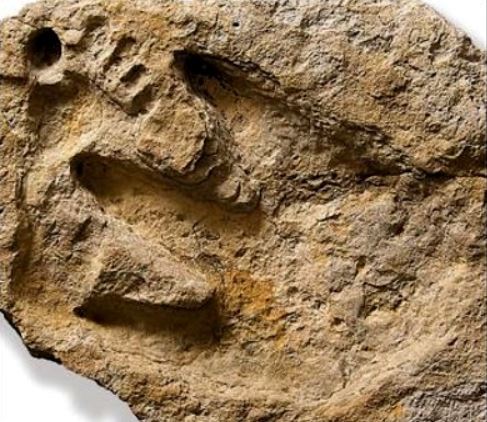 It is formed by the convergence of the North Paluxy River and the South Paluxy River near Bluff Dale, Texas in Erath County and flows a distance of 29 miles (47 km) before joining the Brazos just to the east of Glen Rose, Texas in south-central Somervell County.

The story begins in 1909 with the accidental discovery, by a local teenager, of three-toed footprints in a tributary of the Paluxy River near Glen Rose, Texas, southwest of Fort Worth. Eventually they were attributed to meat-eating, bipedal dinosaurs known as theropods.

In 1910, however, two young brothers fishing in the river came upon something seemingly different: not only the familiar three-toed tracks embedded in limestone but “giant man tracks” in their company. Fifteen to eighteen inches long, they quickly became known to local people,who regarded them as curiosities, apparently unaware of the radical implications of such a discovery.

By the 1930s a Glen Rose man, Jim Ryals, was removing dinosaur and “giant man” tracks and peddling them to tourists. George Adams, another local, carved phony tracks of both kinds. Some of these “man” tracks, though amateurishly done, would survive to fool would-be truth-seekers decades later.

Around this time Roland Bird, field explorer for the American Museum of Natural History, examined tracks of both theropod and sauropod dinosaurs in the Paluxy’s limestone bed. (Sauropod tracks were new to science, and Bird’s discovery received wide publicity.)

He also heard rumors of man tracks, and on one occasion Jim Ryal showed him what Bird called a “mystery track,” mostly indistinct but “about 15 inches long, with a curious elongated heel.” Bird could only speculate that some “hitherto unknown dinosaur or reptile” had made it. 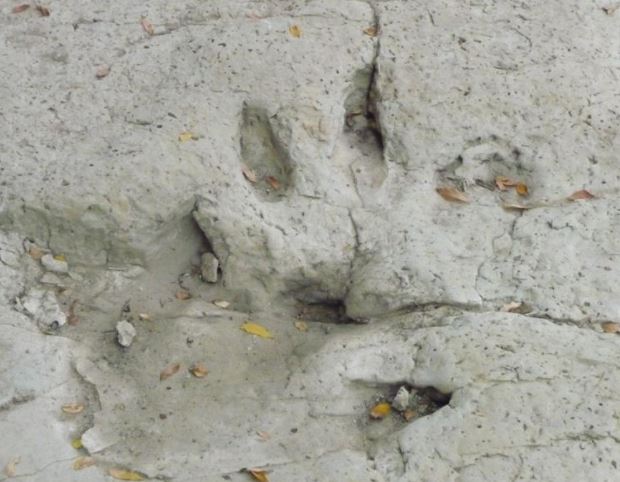 Though Bird rejected any notion that these tracks demanded a revolutionary revision of conventional paleontology, others who came later were not so cautious. Some saw the tracks as a blow to a hated doctrine, evolution. The first of these was Clifford Burdick who, intrigued by Bird’s remarks, made a quick visit to Paluxy.

Burdick, a founder of the creationist Deluge Society, subsequently wrote an article for the July 25, 1950, issue of Signs of the Times, a Seventh Day Adventist publication,wherein he declared that the tracks amounted to a clear refutation of evolution. A popular and influential creationist book, John Whitcomb and Henry M.Morris’s The Genesis Flood (1961), hailed the discovery, and soon it was being featuring prominently in anti-Darwinian literature.

After reading A. E.Wilder-Smith’s Man’s Origin,Man’s Destiny (1965),Baptist minister and filmmaker Stanley Taylor led several expeditions to Paluxy over a four-year period. In articles published by the Bible-Science Association, he argued that the tracks were of human origin, but it was his 1972 film Footprints in Stone that had the most impact on popular perceptions, especially in fundamentalist circles, though the claims also began showing up in Fortean literature.

The tracks not only cast doubt on science’s view that the Earth is of great age, the creationists asserted, but constituted evidence for a Great Flood that creationists think occurred around 4,000 B.C. In the Flood humans and dinosaurs perished together. The tracks also showed, as Genesis indicates, that giants had once walked the Earth.

A 1970 study at the Paluxy site conducted by creation scientists from Loma Linda University concluded that the tracks were of dinosaurs; other alleged tracks were not that at all, merely the effects of erosion on the rock.

Ten years later Tim Bartholomew and Glen J. Kuban, two young science students of creationist disposition, went to Paluxy, studied the tracks, and dismissed the human-origin belief. Some of the tracks were, in their judgment, “some type of unusual dinosaur tracks with elongate ‘heels’.” 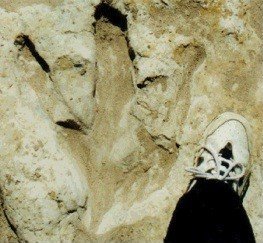 In 1984 Kuban made a remarkable discovery: colorations that followed the pattern of dinosaurian digits. In other words, sediments different from those in the rest of the track had filled in the toe marks and later hardened to rock.

At first, other dinosaur specialists were reluctant to endorse Kuban’s findings, since they violated a long-held belief that bipedal dinosaurs nearly always walked on their toes. The Paluxy tracks suggested that these dinosaurs sometimes pressed the full weight of the soles of their feet on the ground.

Subsequently, after other paleontologists found the same colorations in similar tracks near Clayton, New Mexico, they accepted Kuban’s interpretation as correct. Kuban and a colleague, Ronnie Hastings, invited leading creation proponents to the site and persuaded them that these were dinosaur, not human, prints. A creationist movie on Paluxy, Footprints in Stone, was quickly withdrawn.

Even so, some creationist writers and evangelists continue to portray the tracks as human. One of them, Carl Baugh, has produced yet more “evidence” he claims to have uncovered at the site: a human tooth, a human finger, and a hammer.

The tooth has been shown to be from a Cretaceous fish, and the finger is no more than a suggestive-looking rock. The hammer has not been demonstrated to be of any great age. Baugh, who has been accused (even by fellow creationists) of scientific incompetence and worse, claims degrees from unaccredited and even nonexistent institutions of higher learning. Kuban, who has investigated Baugh’s background, states flatly that he “has no valid degrees whatsoever.”
Noncreationist writers on “true mysteries” also have discussed the prints, not to prove Genesis but to argue that human history is far older than generally thought. In Worlds Before Our Own (1978), for example, Brad Steiger wrote that advanced c̳i̳v̳i̳l̳i̳z̳a̳t̳i̳o̳n̳s̳ of giant human beings may have existed millions of years ago.

“Cataclysmic changes in the Earth’s crust” as well as a “prehistoric nuclear war” wiped out all nearly all evidence for their presence. Among the few surviving pieces are the Paluxy prints.