On January 20, Military forces captured two extraterrestrial creatures still alive in Brazil. The capture occurred in neighboring areas of city of Varginha, State of Minas Gerais, Central Brazil. The fact is to be considered one of the most significant ever registered in this country and in the entire world. Military authorities are keeping secret all details of the operation, but some information has already leaked to the UFO community due to the investigative job of Dr., Ubiraja Franco Rodrigues and Vitorio Paccaccini who lives nearby and recognized as serious and dedicated researchers. 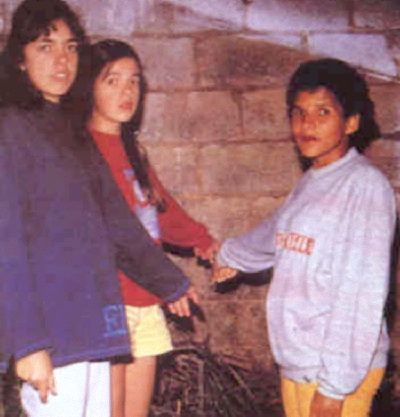 On the afternoon of January 20, about 3.30 PM local time, 3 young girls named Liliane, Valquiria and Katia observed a strange creature in a field of small bushes a few blocks from where they live. It was Saturday and they were coming back from their jobs when, crossing an empty area their attention was attracted by a strange being a few meters away. The ET was kneeling and looked like it was hurt, suffering some sort of pain. No UFO was ever seen. The girls observed it for a few minutes and run away, afraid that they had just encountered the devil….

The three girls were extensively interrogated by above mentioned researchers, leaving no doubt whatsoever about what happened. Very simple kids, they described the ET’s as being a dark brown creature, with a small body of 4 – 5 feet in height, no hair at all, big brown head, small neck. It also seemed to have some greasy, dark oil on its skin. A strange odor was noticed by the mother of the girls, when she went to the site. The head of the creature had 2 big red eyes, no pupils, very small mouth and nose and – what is interesting – 3 protuberances in the head. The girls described such protuberances as horns. 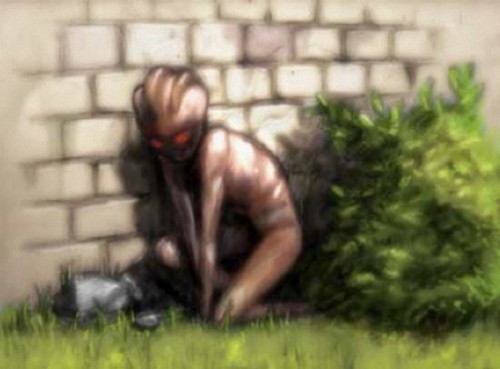 Following the leads, researcher Rodrigues and Pacaccini started making inquiries everywhere in the town of Varginha, in order to know if anybody else had seen the same creature. They found several other people who also observed the ET’s in the same location and maybe other ET’s in different locations. While conducting their own investigations, both discovered that different witnesses has seen army trucks and other military vehicle and personnel that very morning of that day, a few blocks from the place the girls saw the ET’s.

In trying to find out what the military were doing, Rodrigues and Pacaccini came to meet a few soldiers and sergeants. One of them decided to talk secretly about their mission, in a confidential taped interview. This Sergeant confirmed that, about 9:00 AM, January 20. the Fire Department of Varginha was required to capture a strange animal in the area. When four fireman arrived in a truck in the place, they noticed that it was not any strange animal at all, and reported the fact to the Army Sergeant School Commander in neighboring city of Tres Coracoes (about 10 miles east of Varginha)

Army truck was sent to the place and both forces captured the creature using nets and equipment regularly used to capture wild animals. The ET was placed till alive in a box that was then covered by resistant fabric. The box was placed on top of the truck, the vehicle headed to the Army Sergeant School and all personnel involved was ordered not to talk about it with anyone else “It was a Secret Operation” told them the lieutenant-colonel Wanderley, who commanded the operation. After such unusual, confidential report a few other military decided to come forward and speak about the captures as long as their identities were totally kept secret. They all confirmed, on taped interviews, that a second creature (possibly the same one seen by the girls that afternoon) was captured on the night of January 20, by personnel from the Army and the Fire Department. Details of such operation is fully known. This creature identical to the first one, was taken to the Regional General Hospital of Varginha that same night, stayed there for a few hours and then was transferred to a better equipped facility, the Humanitas Hospital.

A few nurses and personnel from Regional General Hospital had confirmed some facts and they were all suppressed. Individuals who had contacts with the second creature were advised to avoid press and UFO Researchers and not to talk about it with anyone, not ever their families or relations. AT the Humanities Hospital the second creature was kept at least for 2 days and on the second night on January 22nd a huge military operation took place to remove the creature already dead.

Interviews with some of the military who participated in this new operation, removing the creature from the Humanitas Hospital, declared that 3 Army trucks were used, each one driven by 2 different soldiers. It is believed that 3 trucks were used to remove only one body in order to avoid the soldiers to know in which truck would it be transported. The drivers and their follows couldn’t see the details of the operations, as they were kept outside the hospital area. Military personnel from the Army Internal Intelligence (called “S-2” in Brazil and extremely violent and repressive) were responsible for getting the corpse from the interior of the hospital, placing it in a box and then in one of the trucks.

All 3 trucks then were taken to a military facility in Campinas, State of Sao Paulo, about 200 miles from Varginha, in the middle of the night. There, the corpse was removed to the University of Campinas , one of the best institutions in the country. It is believed – and we already have detailed information to be soon released that the ET body was autopsied by Dr. Badan Palhares, worldwide acclaimed as one of the best professionals in that area alive (he was the one who autopsied German Nazi Mengele, about ten years ago) Palhares, as well as any other authority involved, denied he was involved in any such operations.

UFO researchers from all over the country have been helping closely Rodrigues and Pacaccini, in order to discover each and every detail of the capture of the two ET’s, Media in Brazil has never been so active and great majority of population believes that the case is real and that the military and civil authorities involved are keeping the facts secret. Many strange facts are happening simultaneously, such as prison of soldiers, Sergeants being transferred at short notice etc. The phones of many UFO researchers involved in the case are confirmed to be tapped and a few threats have been made anonymously.

Up to now, almost all details of the whole operation are known to the UFO researchers and a few can already been released. In a matter of weeks, all information will be fully disclosed by the UFO researchers involved, throughout the UFO Magazine, to the entire world.

Everyday new pieces of this fantastic puzzle are being received by researchers in many cities and more and more military personnel have agreed to talk. Meanwhile, the region where Varginha is located, in the South of State of Minas Gerais, is subject to one of the biggest UFO waves ever registered, the huge UFO’s in close range observations, landings and contact All About Those Flaming UFOs! Literally Flaming!