The Badajoz UFO incident is one of the strangest UFO phenomena that happened in the history of Spain that is related to its Air Force. This incident became popular by the name “Green Man of Talavera la Real,” as the two Spanish soldiers, José María Trejo and Juan Carrizosa Luján claimed to have seen and shot a being of unknown origin.

At around 1:45 am local time on November 12, 1976, José María Trejo and Juan Carrizosa were on duty (each in their booth, approximately 60 meters apart from each other) in the so-called fuel zone of the Talavera la Real Air Base, Badajoz, Spain. Suddenly, they began to hear some strange noise, it sounded like radio interference at first but turned into a high-pitched, piercing whistle that hurt their ears.

The soldiers thought the sound was made by someone who had entered the military area but in five minutes, it just stopped. Trejo shouted to his partner Carrizosa if he had heard him and he answered yes. They prepared their weapons, “Z-62” submachine guns with the regulation ammunition, and carried out a visual inspection of the surroundings. Again, the sound began, and it was so intense that it seemed that their heads would explode. It stopped in five minutes again and they saw a light in the sky, on its own vertical, similar to a flare, which lasted for about 15 or 20 seconds. José Hidalgo, another companion approached the sentry boxes, accompanied by one of the wolf-dogs, asking them if they had seen the flash. Fearing that someone had entered the facilities with the intention of sabotage, they decided to notify Pavón, the guard corporal. He ordered them to carry out an ocular inspection.

With loaded weapons, they began to walk parallel to the wall that separates the main road from the Base. Seeing that the dog, specially trained for these cases, did not show any sign of concern, they were calm enough. But suddenly, when they had walked about 300 meters, they felt a whirlpool and heard branches of a nearby eucalyptus break. 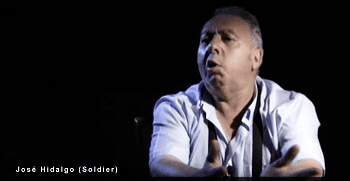 This alerted them, clinging to their submachine guns, they released the dog, which went straight to the place where they had heard the noise of the branches. They were waiting for the dog to make some noise or bark, but in a few seconds, it came back dizzy, wobbly. This action was repeated four or five times until the dog began to make circles around the soldiers (a defense technique that these dogs are taught as a measure of protection against danger to the person they have to defend).

They called a halt several times, but no one answered until José María Trejo had a feeling that someone was after him. At 15 meters from them, they saw a greenish figure, made up of points of light, about 3 meters tall, with a small head and a kind of helmet, with a thick body and long arms (in a cross position).

Trejo tried to shoot, but before he could do it he felt a general stiffness and fell onto the ground. Hidalgo and Carrizosa began to fire, between 40 and 50 shots were fired at that being, which lit up like a flash and disappeared, returning again to the screeching sound they had heard before that appearance, this time lasting 10 or 15 seconds. They helped Trejo to stand on his feet and put the entire base on high alert.

The following day, a total of 50 men inspected the area where the event had taken place and found nothing. Not a single shell casing, no bullet embedded in the wall surrounding the perimeter, nothing.

A few days later, when Trejo entered the Base dining room, he fell unconscious to the ground after having shown signs of blindness. He began having health problems, in which states of blindness are intermingled with a subsequent admission to a hospital institution. His last hospitalization was on November 30 at the Madrid Air Force hospital, lasting one month and with a conclusion of having suffered “nervous imbalances.” From that moment, these “nervous imbalances” did not occur again.

Air Force experts confirmed that the machine guns had been fired, but what had happened to the projectiles? What or who had been shot?

According to the protagonists of the story: “We do not know what it is exactly. But, of what we have no doubt — since the three of us saw it perfectly — is that “was something similar to a man, but very tall…”

The Talavera la Real Air Base is an airport in Badajoz, right on the border of the municipality with Talavera la Real, in the province of Badajoz, 15 km from the city, in the heart of the Guadiana lowlands. It began to function in 1953, being called the School of Reactors. Although it initially had two runways, it currently only has one, which has undergone several extensions to reach the current length of 2,805 meters and is shared with the Badajoz Airport, which is located on the other side of the runway.

The 23rd Wing of the Air Force is located at the airbase, dedicated to teaching and training combat pilots who will make up the fighter units. They have Northrop F-5 Freedom Fighter aircraft.