In the UFO field there are always going to be skeptics. Until aliens actually land and walk up to us and talk to us, there is nothing that can happen that will change some people’s minds. Yet on occasion there are those who do a complete reversal, whether by some epiphany, new information, or an experience of their own. In 1947 a very very skeptical pilot flew off into the skies, scoffing at the idea of UFOs, and would come back a changed man.

The year 1947 was a very important one for ufology, and indeed it can be argued that this was the year that really kicked off the phenomenon in the public consciousness. The birth of the modern UFO phenomenon is usually said to be June 24 of that year, when pilot Kenneth Arnold sighted nine metallic high speed, roughly circular objects that flew “like a saucer would if you skipped it across the water” near Mt. Rainier, Washington, in the United States. When his report hit news publications across the country, it triggered a whole wave of sightings of what were now being called “flying discs” and later “flying saucers,” creating an absolute sensation. The first photograph of a flying disc would appear on July 5th of that year, when U.S. Coast Guard Yeoman Frank Ryman snapped a shot of a mysterious bright object over Lake City, Washington, and it all came to a head a few days later when on July 8 the alleged Roswell UFO crash happened, at first confirmed to be wreckage of a flying saucer but later explained as a weather balloon.

Among all of the myriad sightings made that summer in the skies of Washington, one very intriguing encounter was made by an experienced airline crew, and it is one of the first ever recorded encounters between a UFO and a commercial airliner. In 1947, Captain Emil J. Smith was a pilot for United Air Lines, and that summer after the UFO craze was ignited by Arnold, he had remained rather skeptical of all of the talk of spaceships and aliens. Indeed, he had long bluntly answered questions about whether he had ever seen one in the negative, and dismissed Arnold’s sighting, saying “What he probably saw was the reflection of his own instrument panel.” When he took off in his DC-3 on July 4, 1947 on a flight from Boise, Idaho to Pendleton, Oregon, he was still going on about what nonsense he thought flying saucers were, telling his crew “I’ll believe in those discs when I see them.” On this day, he wouldn’t have long to wait. 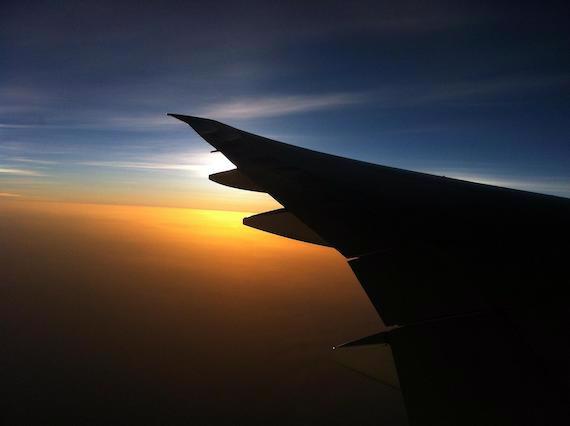 UAL Flight 105 was supposed to be a routine flight, and when the airliner lifted off at 9:04 p.m. in perfectly calm and clear weather there was no reason to suspect that it wouldn’t all go according to plan, but things were about to get weird indeed. Only about 8 minutes after takeoff, Smith and co-pilot Ralph Stevens spotted a group of five fast-moving disc-like objects, one larger than the rest, which they at first took to be simply other aircraft, but as the objects headed in their direction and drew closer, they could see that these were no normal aircraft, as they had no discernible wings or tails. The formation of strange objects then changed from a very tight cluster to a more open one, then back to a tight one, doing this several more times in quick succession as the astonished witnesses looked on.

They called in a stewardess to confirm what they were seeing, and then contacted ground control to tell them they had just seen “a whole flock of the mysterious flying discs” and get additional confirmation of the objects, and that was when the strange formation sped off out of sight at incredible speed. Almost immediately after this, another group of four similar objects came into view before seemingly merging into one large object and shooting off into the unknown. Physicist, professor of meteorology, and UFO researcher, Dr. James E. McDonald, who would later interview Smith, said of the bizarre incident:

Smith emphasized to me that there were no cloud phenomena to confuse them here and that they observed these objects long enough to be quite certain that they were no conventional aircraft. They appeared “flat on the bottom, rounded on top”, he told me, and he added that there seemed to be perceptible “roughness” of some sort on top, though he could not refine that description. Almost immediately after they lost sight of the first five, a second formation of four (three in line and a fourth off to the side) moved in ahead of their position, again traveling westward but at a somewhat higher altitude than the DC-3’s 8000 ft. These passed quickly out of sight to the west at speeds which they felt were far beyond then-known speeds. Smith emphasized that they were never certain of sizes and distances, but that they had the general impression that these disc-like craft were appreciably larger than ordinary aircraft. Smith emphasized that he had not taken seriously the previous week’s news accounts that coined the since-persistent term, “flying saucer.” But, after seeing this total of nine unconventional, high-speed wingless craft on the evening of 7/4/47, he became much more interested in the matter. Nevertheless, in talking with me, he stressed that he would not speculate on their real nature or origin. I have spoken with United Air Lines personnel who have known Smith for years and vouch for his complete reliability.

Although Smith hesitated to attribute what he had seen to aliens, he was an experienced pilot and was certain that it had not been reflections, smoke, fireworks, a weather phenomenon nor airplanes. Shortly after reaching his destination, Smith would make a statement and the news was soon circulating worldwide. Interestingly, this particular encounter happened on the same day as 85 other reports of unidentified flying objects had been flooding in, yet this one stands out due to there being several experienced and reliable witnesses. Dr. James E. McDonald would say of this in a statement to the U.S. House of Representatives, Committee on Science and Astronautics, at the 1968 Symposium on Unidentified Flying Objects:

The 7/4/47 United Air Lines sighting is of historic interest because it was obviously given much more credence than any of the other 85 UFO reports published in press accounts on July 4, 1947. By no means the most impressive UFO sighting by an airliner crew, nevertheless, it is a significant one. It occurred in clear weather, spanned a total time estimated at 10-12 minutes, was a multiple-witness case including two experienced observers familiar with airborne devices, and was made over a 1000-ft. altitude range climb-out that, taken together with the fact that the nine objects were seen well above the horizon, entirely rules out optical phenomena as a ready explanation. It is officially listed as an Unidentified.

What did the crew of this plane see out there? Was it attributable to mundane phenomena or is it perhaps something else? It is certasinly an interesting case in an era when the UFO phenomenon was just taking off, and whatever it was, it definately changed the mind of one diehard skeptic.