The alien abduction phenomenon is a truly weird corner of UFO lore. Here we have accounts of people being spirited away by otherworldly forces, to come back with myriad bizarre tales of their experiences at the hands of these entities, and it is always at the very least deeply odd. All manner of people, from all walks of life have claimed to have been taken away by aliens, yet some reports tend to carry perhaps a bit more weight than others, coming from traditionally “reliable” witnesses. One such case is that of a police officer who claims to have been taken away by aliens, and who stuck by his story even in the face of scathing ridicule.

In 1976, Herbert Schirmer was just a 23-year-old young man who had just served in the Navy in Vietnam and had just started working for the Ashland Police Department, in Nebraska, in the United States. On December 3 of that year, he had been with the force for 7 months, and on this evening, he went out on his regular patrol as usual, going out along Highway 63 for what was normally a pretty quiet beat. The rural area didn’t typically have much going on, with his patrol usually very uneventful, some might even say boring. There was no reason to think that this evening would be any different, and as he headed down that dark highway, the lane lines hypnotically flickering by, he would have had no idea of the extremely bizarre turn his life was about to take.

It was around 2:30 AM when Schirmer rounded a bend near the intersection of Highway 6 and 63, and saw before him what he at first took to be the lights of an oncoming vehicle, two blinking red lights atop what he took to be a large white truck. He soon realized that whatever it was, the vehicle wasn’t moving. Thinking it may have been someone who had broken down and was perhaps in a bit of trouble, he decided to stop his patrol car and shine his spotlight out towards what he still thought was a truck. When the spotlight hit the object, it soon was very apparent that this was no truck. The red lights seemed to be emanating from two portholes on the side of a silver, disc-shaped, metallic object that was like polished aluminum and hovering in mid air about 8 feet off of the surface of the road. Around the mysterious object he could see what looked like some sort of catwalk encircling it, and on its bottom was what looked like some sort of landing gear. As he stared in awe trying to process what he was seeing, the object then passed directly overhead and belched forth flames to shoot up into the sky at great speed, leaving Schirmer there alone in the dark, quiet night, wondering if he should call it in or not.

Schirmer made his way back to the station, and he quickly realized that a whole hour had passed, even though it had felt like only around 10 minutes. He then soon had a red welt spring up on his neck as he was overcome with an excruciating headache, nausea, and a “weird buzzing” in his head. He made a note of his sighting in a report, and that was that, until when 3 months later, when a UFO research group from a United States Air Force funded group of scientists at the University of Colorado called the Condon Commission came knocking. The organization was mostly all about looking into UFO sightings and trying to debunk, discredit, or explain them away, and they went about inviting Schirmer to come out to Boulder, Colorado for questioning, which he accepted. He would then undergo regressive hypnosis, administered by psychologist Dr. Leo Sprinkle of the University of Wyoming, and his story would get even stranger still.

Under hypnosis, Schirmer was able to have many hidden memories from that fateful night come floating up to the surface. He claimed that his car’s engine had cut out and the radio had died, after which inscrutable humanoid beings 4 1/2 to 5 feet tall had emerged from the enigmatic ship, dressed in silver-grey uniforms and helmets with antennae on them, and with slanted “catlike” eyes, white-grey skin, long, sharp heads, flat noses and slit-like mouths. On the front of their uniforms were emblems featuring a winged serpent of some sort. Schirmer recalled having tried to draw his pistol but found that he was somehow unable to do so, as if he had been paralyzed. These creatures revealed themselves to be friendly, speaking to him telepathically and asking him if he was “the watchman of this town” and bringing him aboard their ship. Once there, he would say that they had shown him around and explained various things about themselves, such as that they drew power for their ship from power lines and had a base in the planet Venus, and they also told him that they would visit him again and that he would “see the universe.” The whole report was rather detailed, with Schirmer describing each of what he said were three levels of the ship, but the Condon Committee was unimpressed, saying:

Evaluation of psychological assessment tests, the lack of any evidence, and interviews with the patrolman, left project staff with no confidence that the trooper’s reported UFO experience was physically real. 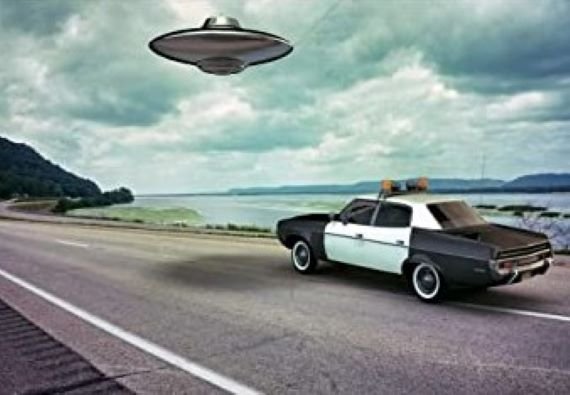 In the aftermath of all of this, Schirmer would return to Nebraska to scathing ridicule and personal attacks on his reputation. He was relentlessly taunted, made fun of, and there was even a bullet riddled effigy of him hung up at Ashland Cemetery. He would step down from his job at the Ashland Police Department, suffer from psychological problems and depression, and it was even reported that the whole thing had caused his marriage to disintegrate, his wife unable to handle it all and leaving him. Amazingly, throughout this all he would stick by his story, eventually moving to Omaha and keeping a low profile to disappear from the public eye. Despite all the ridicule aimed at him, Schirmer has had plenty of those who have believed him, and one of these is comic artist Michael Jasorka, who created a self-published 50-page graphic novel depicting the events. Jasotka has said of the account:

I’ve always been intrigued by UFOs. Herbert’s just spoke to me. It was so vivid. The facts that he brings across in this story telling are beyond a creative mind, they’re too, they’re too detailed let’s say. You could tell from his storytelling manner and his voice that he couldn’t have conjured this up. We believe in this case, we really think it occurred with him I think popular cultural media is looking for these kinds of things because not everybody knows about them.

The case has been picked apart by UFO researchers ever since, and it is hard to know what to make of it all. It is certainly notable that Schirmer has always stuck by his story even in the face of ridicule and his own life falling apart around him, so is this perhaps indicative of him maybe telling the truth, or at least what he truly believes to be the truth? Or is this just the ramblings of someone who has lost their grip on reality? It is difficult to say for sure, and the case of Herbert Schirmer remains unsolved.