A man who investigated the famous UFO crash in Roswell, New Mexico, wrote his private thoughts in a journal that has now been revealed for the very first time. And what he wrote is pretty mind-blowing.

Jesse Marcel Sr. was an intelligence officer with the 509th Bombardment Group at Roswell Army Air Field. He was the first person on the scene of the Roswell crash back in July of 1947 and he led the investigation. While the government claimed that the object was just a weather balloon, Marcel Sr. had always stated that the debris from the crash site was “not of this Earth”. He passed away in 1986 and now his grandchildren (Jesse Marcel III and John Marcel) are telling his story based on his notes in his private journal.

Jesse Marcel III stated that his grandfather “was made to be the fall guy” and that he had been “ordered” to stay quiet about what was actually at the crash site. And throughout the years, his story never changed as to what he witnessed. 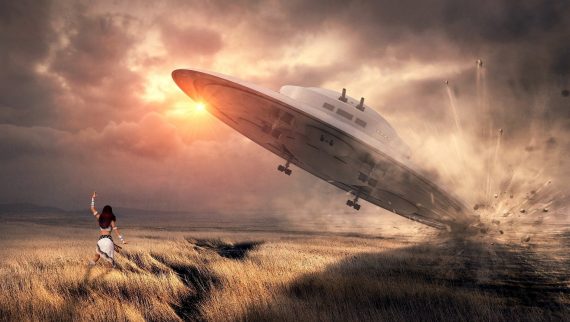 The debris field was initially discovered by W.W. “Mac” Brazel who was bringing his sheep to a stream for a drink and that’s when he noticed the crash site. In fact, it was his sheep that brought Brazel’s attention to the site as the animals wouldn’t walk near it. So whatever had crashed there, the animals didn’t want to go anywhere close to it. At that point, Marcel Sr. was brought in to investigate the scene.

Jesse said that the government’s claim that the wreckage was a weather balloon was “preposterous” as his grandfather would have easily recognized it because he had experience working on them. “He had examined the debris in the field and determined it was not made by human hands,” Jesse stated.

As for the material found at the crash site, Marcel Sr. wrote in his journal that he tried to melt or even warm up the material by holding a lit lighter next to it but nothing happened. And after the debris was transported over to the Roswell base, he attempted to drill a hole in it but the blades of the drill broke as soon as they made contact with the material. He told his grandkids that the material was light but strong.

Another interesting fact written in his journal was that some of the beams had “alien writing” on them and that “there were glass fibers and fiber optics that may have been from the computers on the ship,” as stated by John, adding, “When my grandfather came home with the debris, our dad looked through it with a shining light and saw a purple light inside with a symbol of a seal balancing a ball on its nose.” Jesse added “My grandfather said ‘you might be the first person on Earth to look at alien writing’.”

As for whether or not there were aliens on board the craft, Marcel Sr. stated that he never saw any extraterrestrials at the site but he did mention that there were several other crash sites around that same time and that other investigators claimed to have seen the life forms.

Jesse finished off by stating, “The big thing about our grandfather is that this put him under a lot of pressure,” adding, “He felt he was the right person who was at the right place at the right time and he was very lucky to be that guy – even after all the pressure.”

More information on Marcel Sr.’s journal will be detailed in a three-part series called “Roswell: The First Witness” which will be aired this Saturday on the History Channel. I know that I’m looking forward to watching that series.