Over the past few days I’ve highlighted how the subject of Ufology is clearly connected to the likes of Bigfoot, Dogmen, Shug Monkeys, and the British Bigfoot. On top of that, I’ve demonstrated that UFO activity has occurred at none other than Loch Ness, Scotland. In that incident, it was long-time Nessie seeker Ted Holiday who, in 1973, encountered nothing less than a mysterious and menacing Man in Black. Now that I’ve addressed the UFO-monster links, it’s time to show how Ufology is clearly tied to the worlds of the paranormal, the supernatural, and the occult, too. I’ll begin with the matter of alien abductions. The typical scenario involves people subjected to intrusive experiments and tests on the abductees – whether in their bedrooms or on-board UFOs. Typically, eggs, sperm, blood and skin samples are taken by the dwarfish, black-eyed alien “Grays,” as they are known. The fact is, though, that alien abductions eerily mirror encounters with the dreaded Incubus and Succubus of centuries ago.

“Incubus” is a very apt title for the male category of these menacing entities, since its origins can be found in the Latin word “incubare,” which translates as “to lie upon.” Typically, attacks were – and still are, to this very day – made upon unsuspecting individuals during the early hours of the morning. Mostly between 2:00 a.m. and 4:00 a.m. That’s usually the time period when a person is in a state of deep sleep, and, therefore, open and vulnerable to a supernatural assault. Sex is a major aspect of an encounter with the Incubus or the Succubus. In view of all the above, only an idiot could fail to see the parallels between the Grays today and the Incubus and the Succubus of centuries long-gone. Ask most abduction researchers about those parallels and they’ll probably provide a typically lame answer: that the people of ancient times were mistaking aliens for demons. On the other hand, a good case can be made that the whole abduction phenomenon is far more paranormal in nature than it is extraterrestrial. Of course, you can’t tell that to most ufologists. They want their aliens, not supernatural creatures of a very dangerous kind. Moving on, there’s the matter of what happened when Albert Bender entered the field of Ufology in the early 1950s.

Albert Bender was the guy who pretty much began the Men in Black phenomenon. Between 1952 and 1953, Bender had traumatic encounters with the dreaded M.I.B., something that eventually led Bender to quit the UFO scene. It should be noted that Bender’s Men in Black were not of the Tommy Lee Jones/Will Smith type. They were gaunt, shining-eyed creatures. Not only that, the attic room Bender called home in Bridgeport, Connecticut became a place filled with menace. The odor of sulfur and brimstone occasionally filled the room. Bender’s health started to go down the hill. He developed ulcerated colitis. Paranoia took hold. Bender developed an irrational fear of cancer (which he did not have – he lived until his 90s). He began to delve into the world of alchemy. Shadowy figures began to torture Bender. He filled his attic room with paintings of demons, black cats, skulls, monsters and skeletons. All of this sounds very much like some kind of supernatural attack mixed with Bender’s mind spiraling into the world of occult. That’s right: the guy who brought the M.I.B. to the world of Ufology (albeit largely via the writings of others) was far more connected to the domain of the paranormal than to the world of UFOs and aliens.

Bringing matters to modern times, there’s the controversy surrounding what have become known as the Black Eyed Children. Although, today, we have people who claim to have seen the BEC in the period from the 1930s to the present day, the very first reported case didn’t surface until the late 1990s. The location was the Lone Star State, specifically the city of Abilene. The story revolves around a man named Brian Bethel, a journalist who works for the Abilene Reporter News. It was late one night when Bethel’s life was changed and he came to realize that there are dangerous, supernatural entities in our midst. It was close to 10:00 p.m. when Bethel had the kind of close encounter that one never, ever forgets. He had pulled up at a mall not too far from his home, to deposit a check in a mail-box. All was quiet and dark. Bethel, using the lights of the mall to illuminate the interior of his vehicle, was writing the check when he was rudely interrupted. He jumped with surprise at the sight of a couple of kids who were standing next to the car, on the driver’s side. But, there was something about these kids that rang alarm bells in Bethel’s head. In fact, as Bethel would imminently learn, things were wrong in the extreme.

Bethel stared at the pair and couldn’t fail to see just how incredibly pale the face of one of the boys was. The other had what Bethel described as olive-colored skin. Both boys were around ten to fourteen years of age, Bethel estimated, and both were dressed in pullovers. Only one of the two boys spoke – he claimed that they wanted to see a movie, Mortal Kombat, at the local cinema. But, there was a problem: they had left their money at home. Could Bethel take them to their homes to get some cash? Bethel near-instantly realized that this whole situation had an air of dark and disturbing theater about it. There was an undeniably unsettling agenda at work, and it had absolutely zero to do with movies. 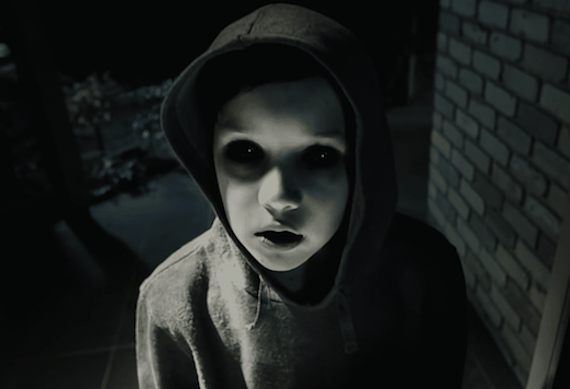 Bethel awkwardly hemmed and hawed for a few moments, something which caused the talkative boy to become ever more insistent that Bethel let them in the car. Then, things became downright eerie and chilling: Bethel found himself almost mind-manipulated, to the point where, to his horror, he could see that his hand was heading to the driver’s-side door – with the intent of opening it, but without his control. Bethel, fortunately, broke the enchanting spell and didn’t open the door, after all. This clearly incensed the talkative boy, who amped up the pleas to allow them into Bethel’s car. It was then, for the first time, that Bethel finally got a good look at their eyes. In his own words – referenced in Pararational’s May 16, 2013 article titled “Brian Bethel – The Black Eyed Kids” – Bethel stated: “They were coal black. No pupil. No iris.” The two boys realized that, by now, they were losing the battle to be permitted to get into Bethel’s car. On this very point, Bethel himself said that the boy who did all of the talking “wore a mask of anger.”

The boy, now displaying a look on his face which was part-frustration and part-anger, almost shouted: “We can’t come in unless you tell us it’s okay. Let us in!” Bethel, terrified, did nothing of the sort. What he did do was to slam the car into reverse and head for home, completely panicked by the whole thing. Oddly, as he drove away, Bethel looked back, only to see that the boys were nowhere in sight. In what was clearly and impossibly quick time, they had vanished. And, thus was quickly born a legend. It’s a legend that shows no signs of stopping. It’s only getting worse. It’s a fact that more than a few Ufologists believe the Black Eyed Children to be alien-human hybrids. The black eyes largely being the reason. It should be noted, though, that in just about every single case on record, the creepy kids will only enter your home if invited. That, of course, echoes back to the old legends of vampires needing an invite to enter the homes of their victims. So, we see yet another aspect of what some believe to be UFO-connected when, really, the evidence suggests the BEC are supernatural and not extraterrestrial.

Now, let’s take a trip to the early 1950s. That’s when the phenomenon of the “Space Brothers” and the “Contactees” began. The former were long-haired, human-looking beings who wanted us to lay down our atomic weapons. As for the “Contactees,” well, they were the ones chosen to spread the word of the aliens. Or, rather, what were assumed to be aliens. So, what does all of this have to do with the theme of this article? I’ll tell you. So many people in Ufology dismiss, or overlook, one of the most important aspects of the Contactee phenomenon. Although some of the Contactees had face-to-face encounters with the Space Brothers, late at night, and in desert environments, many did not. Rather, they took intriguingly different approaches. For example, George Hunt Williamson made many of his communications by the use of nothing less than ouija-boards. It worked. And with not an alien spaceship in sight. George Van Tassel often used mediation to contact his alien friends. Some used psychedelics; something that put them in the category of a Shaman taking a trip.

What all of this demonstrates is that while the UFO phenomenon is perceived to be extraterrestrial in nature and origin, the fact is the whole subject is steeped in matters relative to the occult, to the paranormal, and to the supernatural