Out in the rural desert town of Jafr, in eastern Jordan, about 190 miles east of Amman, nothing much ever really happens. This is a simple, forgotten place in the unforgiving desert terrain well away from the rest of the world, a place that not even people in Jordan have ever really heard of, but this would change in 2010, when this rugged town of 13,000 suddenly got major national news coverage when Jafr was supposedly invaded by menacing, malevolent aliens from another world. And so would begin a panic unlike the region had ever seen before, which in the people’s minds at least involved towering aliens and their death machines out to kill them all.

On April 1, 2010, a major story ran on the front page of the Jordanian newspaper Al-Ghad. According to the report, UFOs had descended from the sky to land out in the desert boondocks surrounding the dusty town, piloted by massive, marauding aliens that were described as being a full 10 feet tall which spoke in a squawking language. During the night, the UFOs, which could supposedly shoot beams of intense heat, had reportedly flown about over town, lighting up buildings and city streets as if it were daylight, leaving scorch marks in the ground, and it was also said that some force they were generating had knocked out communications in the area. Panicked residents had reportedly run out into the streets in fear of their lives, and by the time the article made the rounds the populace was in a frenzied panic thinking the world was ending.

Through all of this, parents refused to send their children to school, many stores closed, and the mayor of the city, Mohammed Mleihan, was making preparations to evacuate the entire populace. He would say of this, “Students didn’t go to school, their parents were frightened and I almost evacuated the town’s 13,000 residents. People were scared that aliens would attack them.” When other news outlets picked up the story it seemed to take on a life of its own, with some saying that military personnel were being mobilized and that an alien invasion force was preparing to launch an attack from the desert. In the meantime, the mayor did have security forces patrol the outskirts of town, but they were unable to locate any UFOs or giant aliens.

As soon as the newspaper Al-Ghad realized what was happening, and became aware of the gravity of the uproar their article had caused, Moussa Barhoumeh, Al Ghad’s managing editor, came forward to say that the whole thing had been nothing but an April Fool’s joke, something many astute readers here might have already surmised by reading the date of the publication. According to the editor, it had just been a silly, good-natured prank “meant to entertain, not scare people.” The newspaper issued a formal apology for the inconvenience it had caused, but many of the people of Jafr, who had had their whole life momentarily upended, were furious, not the least of all Mayor Mleihan. He was so livid, in fact, that he threatened to sue the newspaper for their tasteless “big lie,” especially since he had allocated valuable resources to prepare for an alien invasion that had never come.

It does seem odd that Al-Ghad would decide to try and pull such a stunt. After all, whereas someone from the West might be accustomed to seeing fake April Fool’s Day news stories printed on April 1st and cast a skeptical eye at such spectacular headlines on this day, In Jordan it is different. They have no such custom, especially not in a rural, superstitious backwater like Jafr, where most people would not even know what an April Fool’s day prank was. Considering this, it does seem pretty odd that the Jordian newspaper would not only pull a front-page prank article, but also base it in Jafr. In America or Britain it probably would not have been a big deal, but in Jordan it had led to a mass panic and minor regional emergency amongst a populace not versed in such things. 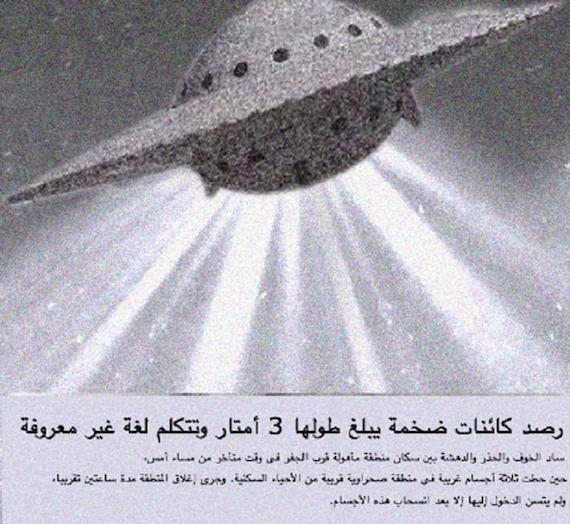 It is in some aspects quite reminiscent of the infamous War of the Worlds broadcast of October 30, 1938, in which future filmmaker Orson Welles adapted the HG Wells classic of the same name as a Halloween radio show over the Columbia Broadcasting System radio network, made up to sound like it was taking place as the alien invasion of the novel happened. It was clearly announced as a dramatization, but presented in a very realistic style of another program being interrupted by news of the invaders from Mars, so some people who caught the show midway through were said to have bought it all as real and flown into a panic due to this realistic “breaking news” style of storytelling used. The extent of this panic has been disputed in recent years, as it turns out that the show wasn’t listened to by all that many people and most of them met it with curiosity rather than fear, but there were no doubt a few who took it to be real and were not too happy about having been fooled. Even though the panic caused by the broadcast was nowhere near as bad as it has traditionally been portrayed, it still did gain quite a bit of backlash from people who did not appreciate its use of its deceptive news bulletin format, leading to stricter regulation of such programs by the Federal Communications Commission.

The Jafr alien invasion scare is the worst case scenario for fake news and questionable journalistic ethics, mixed with pranksters who perhaps went a little too far. This one story threw this little town into an absolute whirlwind of fear and apprehension, and it is a cautionary tale as to how skittish and gullible people can be, especially in an out of the way, undeveloped area where the populace is especially susceptible. It is certainly an intriguing little tale, and shows that the mainstream news is probably not the best place to play out practical jokes. Bizarre Cases of UFOs and Fire