There has been much written of on alien abductions and the people who have had to endure them. It is a phenomenon that has really taken off and become its own strange corner of the world of the weird, and such cases continue to generate debate and discussion. Yet, it is not always just people who seem to be the target of such otherworldly entities. Here we will look at the strange case of the time an elk was plucked off the ground to be whisked off by a UFO right in full view of a group of witnesses.

According to the original report logged by the National UFO Reporting Center (NUFORC) and followed up by UFO researchers Peter B. Davenport, Director of NUFORC and Robert Fairfax, Director of Investigations for the Washington State Chapter of the Mutual UFO Network (MUFON), on February 25, 1999, it all began with a group of forestry workers out at the Cascade Mountains of Washington State, about 20 miles west of Mt. St. Helens. On this day their mission was to plant trees. It was a cold winter morning, their breath frosting the air, and as they took a lunch break at one point just before noon, some of the workers had their attention diverted to a herd of elk in the valley below them. For this area it was not a particularly unusual sight, but things would quickly get very odd indeed.

As the workers watched the animals go about their business, the men noticed something odd come drifting up over the distant ridge, which was described as “a heel-shaped object with two stripes on its back.” They at first thought it was just perhaps a parachute of a skydiver, but whatever it was soon proved to be keeping at a steady height and travelling along horizontally over the terrain, seemingly headed straight towards those elk. This was curious enough that the three workers called over the others to see what they thought, and all of them watched this strange object drift along the terrain completely silently towards the elk herd, which did not seem to be aware of its presence. They could now see that whatever the object was, it was disc-shaped, and perhaps 8 to 10 feet in diameter, and with red and a white patch on the surface. None of them could figure out what they were looking at, and watched it with a combination of surprise and curiosity.

When the herd of elk did become aware of the mystery object approaching them, they scattered and bolted to run into the trees, and in the pandemonium one lone animal ran off down a logging road. The object allegedly pursued this single animal, moving in a sort of odd wobbly way, and as the shocked workers looked on it then seemed to somehow levitate the elk off of the ground with some sort of tractor beam as it appeared to somehow increase in size. After this, the UFO shot off towards a distant ridge with the animal apparently still dangling within that unseen invisible force beneath it, oddly not kicking or struggling, and seeming to be as if an insect caught in amber. The UFO then disappeared behind the ridge, only to go shooting up into the sky moments later without the elk. The investigators of the case would describe this series of events thusly:

The captured elk, its head apparently against the ventral surface of the craft, and body standing stiffly upright, was lifted off the ground-just enough to clear the underbrush. The craft continued its slow, wobbling oscillation. The suspended elk moved likewise as if she were a solid metal sculpture welded to the craft. After the craft acquired (without pause) the animal, it moved away at the same slow pace, to the north, following the contour of the land. The elk’s feet were observed sweeping circles, in conjunction with the craft’s movement, just above the brush and tree tops. Within a short time, the craft approached the forest edge that defined the end of the clear-cut area. Apparently, the craft did not stop or maneuver in time to avoid hitting some of the lower branches. Because of the considerable distance of the craft, the witnesses could not discern exactly what had hit the trees-whether the craft, the elk, or something else is unknown.

After hitting the branches, the witnesses saw it dip sharply and reverse direction before ascending vertically in front of the tree line. All three had the impression that the object had almost dropped the animal. Once above the tree top level, it moved over the forest margin and continued northward, dipped out of sight momentarily (perhaps still following the contour line of tree tops), then ascended at roughly a 45-degree angle into the distance until it was obscured by clouds. 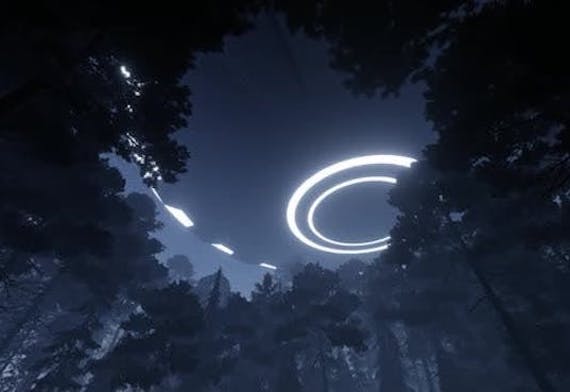 When the report was logged and Davenport and Fairfax went to investigate, they interviewed several of the witnesses and deemed them to be reliable people who seemed to really believe what they had seen. During the investigation there was even an elk carcass found along a logging road to the north of the site, and although the cause of death could not be ascertained, it was unknown if this was the same animal that had been mysteriously “abducted.” Unfortunately, most of the interviewing was done with workers who were not fluent in English, and so was done through their boss, a man named Emanuel, who happened to be skeptical and reticent about the whole thing, and the investigators would lament:

Emanuel’s efforts at translating were laudable, but he was neither a trained investigator nor interpreter. He had not been present during the abduction, and the event floated somewhere outside his compass of understanding. This presented a challenge, since we were unable to understand for ourselves what the witnesses were saying. Compounding these difficulties, Emanuel seemed reserved in his translations. We knew he believed something strange had happened to his workers; however, we also suspected he was not ready to believe anything as exotic as an alien craft snatching up an elk. The testimony waxed expansive and waned timid by turns-torn between the need to tell their story and the anxiety of raised eyebrows at the outrageousness of the tale they told. We struggled with the narrative for 35 minutes. There were innumerable questions yet to ask, but the hour grew late and signals via body language suggested we close the interview and bid farewell. Though crippled by the language barrier, our initial interview provided a tentative and skeletal picture of the event.

It is worth noting that many of the witnesses were very reluctant to talk about it any further, and it leaves us wondering just what to think of all of this. What was going on here? Why would this UFO want to go after that animal? Was there some purpose to all of this, and can we ever hope to understand it? Or was it just a tall tale told by these workers to liven up a slow day? No one really knows, and it is a very odd abduction report to throw on the pile with all of the others.

Interplanetary Intrigue: A U.S. Government UFO Program That Hardly Anyone Has Heard Of

A UFO Battle at a Secret Nazi Antarctica Base