Perhaps the most well known supposed UFO crash in history is the one that allegedly happened in Roswell, New Mexico back in 1947. It really set off the boom of interest in flying saucers, and many people mark it as one of the heralds of the modern UFO craze. Yet the UFO phenomenon has been observed since far before this, all the way back to ancient times, and it also seems that aliens have been crashing their spaceships here for just about as long.

Possibly one of the earliest reports of an actual UFO crash comes from all the way back in the 9th century, and is held within the pages of an obscure Latin manuscript called Liber contra insulam vulgi opinionem. In the very brief report, the Archbishop of Lyons is talking about the French peasants when suddenly he sort of makes an offhand mention of what seems to be UFOs and aliens. He says that these French peasants often a speak of a region they called Magonia, “from whence come ships in the clouds.” According to the odd account, the people in this region often traded with these “storm wizards,” and that sometimes these ships would fall from the sky. In one case, he mentions that he had personally seen these ships, and that he had been present when four of these “wizards” fell from their ship to the earth, after which they had been stoned to death. The whole thing is written of matter-of-factly as if it is just a little everyday anecdote, before the manuscript moves on to leave us wondering just what these ships and their “storm wizards” could have been. 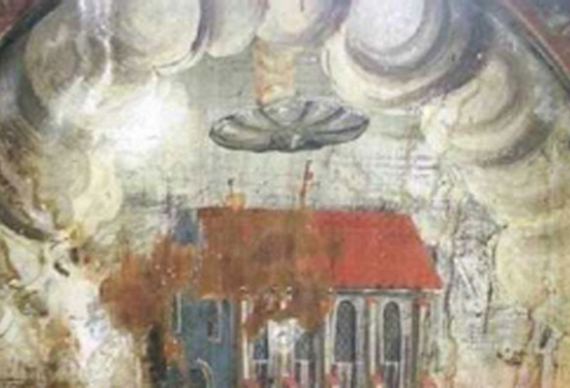 In 1211 AD we have another very early report that seems to be of a UFO crash. It supposedly happened in the remote town of Cloera, where a very bizarre series of events seems to have taken place above a church dedicated to St. Kinarus as the people were holding mass there. An English historical chronicler called Gervase of Tilbury would write of what happened thusly:

It befell that an anchor was dropped from the sky, with a rope attached to it, and one of the flukes caught in the arch above the church door. The people rushed out of the church and saw in the sky a ship with men on board, floating before the anchor cable, and they saw a man leap overboard and jump down to the anchor, as if to release it. He looked as if he were swimming in water. The folk rushed up and tried to seize him; but the Bishop forbade the people to hold the man, for it might kill him, he said. The man was freed, and hurried up to the ship, where the crew cut the rope and the ship sailed out of sight. But the anchor is in the church, and has been there ever since, as a testimony.

What was going on here? It sounds very much like this could have been an early UFO account, but it is hard to say for sure. Moving along in years we come to a report that has made the rounds a bit and which allegedly occurred in 1790, in the French town of Alencon, just west of Paris. The report was quoted by the famed UFO researcher Dr Jacques Vallee in 1975, when he claimed that he had heard this from a man named Antonio Fenoglio, who had allegedly uncovered it while perusing the Archives of the French Academy of Sciences, in Paris in 1967. According to this alleged report, in June of 1790 a Paris police inspector by the name of Liabeuf was sent to the rural village to investigate a strange incident that had happened there. Fenoglio claimed that the police inspector’s report read:

At 5 A.M., on June 12th, several farmers caught sight of an enormous globe which seemed surrounded with flames. First they thought it was perhaps a balloon that had caught fire, but the great velocity and the whistling sound which came from that body intrigued them. The globe slowed down, made some oscillations and precipitated itself towards the top of a hill, unearthing plants along the slope. The heat which emanated from it was so intense that soon the grass and the small tree started burning. The peasants succeeded in controlling the fire which threatened to spread to the whole area. In the evening this sphere was still warm and an extraordinary happened, not to say an incredible thing.

The witnesses were; two mayors, a doctor and three other authorities who confirm my report, in addition to the dozens of peasants who were present. This sphere, which would have been large enough to contain a carriage, had not suffered from all that flight. It excited so much curiosity that people came from all parts to see it. Then all of a sudden a kind of door opened and, there is the interesting thing, a person like us came out of it, but this person was dressed in a strange way, wearing a tight-fitting suit and, seeing all that crowd, said some words which were not understood and fled into the woods. Instinctively, the peasants stepped back, in fear, and this saved them because soon after that the sphere exploded in silence, throwing pieces everywhere, and these pieces burned until they were reduced to powder. Researches were initiated to find the mysterious man, but he seemed to have dissolved. 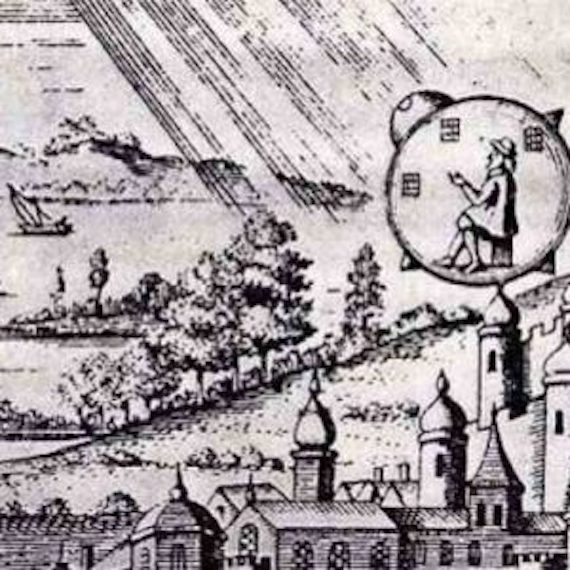 It is a pretty intriguing and spectacular report, and Vallee is a respected researcher, but in the end it doesn’t seem he that he ever saw the supposed original document for himself, and it all comes exclusively from a 1967 claim by Fenoglio. Furthermore, the report seems to be very modern in its depiction and wording, and there is also the fact that the Academy of Sciences has apparently denied that any such document exists, leading one to believe that this may have been a hoax. Still, if it is real, then it is a truly perplexing case of what seems to be an early UFO crash.

Finally, we come to the most recent of these cases, with a more well-known account from 1897, in the small town of Aurora, Texas. At 6 AM on April 17 of that year, it was reported that a great, mechanical airship of some sort had suddenly descended from the sky, sailed over the town square, and smashed into a windmill on the property of a Judge Proctor. This was far from the end of the incident, as it would soon become apparent that this was no normal airship, and its pilot was no normal man. A report by a S.E Haydon in the Dallas Evening News said of the event:

Evidently some of the machinery was out of order, for it was making a speed of only ten or twelve miles an hour and gradually settling toward the Earth. It sailed directly over the public square, and when it reached the north part of town collided with the tower of Judge Proctor’s windmill and went to pieces with a terrific explosion, scattering debris over several acres of ground, wrecking the windmill and water tank and destroying the judge’s flower garden.

The pilot of the ship is supposed to have been the only one on board, and while his remains are badly disfigured, enough of the original has been picked up to show that he was not an inhabitant of this world. Mr. T.J Weems, the United States signal service office at this place and an authority on astronomy, gives it as his opinion that he was a native of the planet Mars. Papers found on his person – evidently the record of his travels – are written in some unknown hieroglyphics, and can not be deciphered.

The ship was too badly wrecked to form any conclusion as to its construction or motive power. It was built of an unknown metal, resembling somewhat a mixture of aluminum and silver, and it must have weighed several tons. The town is full today of people who are viewing the wreck and gathering specimens of the strange metal from the debris. The pilot’s funeral will take place at noon tomorrow.

The wreckage was supposedly disposed of in a well and the alien body buried in a grave at the town cemetery, and from here the story picks up all kinds of strange elements. Some versions say that the military swooped in to whisk away the ship and its pilot. Others say the wreckage contaminated the water supply and led to inexplicable illnesses. The burial plot is said to still be in the town cemetery, which has an official plaque from the Texas Historical Commission that mentions the strange incident. There have been plenty of people who have asked permission to dig the alien’s grave up, but the city has always denied these requests. Considering that at the time Aurora was falling on hard times and this supposed incident drew in huge crowds of people, it has been suggested that this was all a hoax and a publicity stunt, but in the end, who knows what is going on here. Whatever really did happen on that day in 1897, whether it was a hoax or there is any truth to it, the tale of the airship and the alien grave have become a popular local legend.

These reports mostly have an air of myth and mystique about them, partly because they are so lost to the mists of time and shrouded in the shadows of history. There is very little we can do to really know for sure what was seen back in these early times, or how to unwind the truth from possible fabrication. However, if there is any truth to it all, then it appears that UFOs crashing to earth are not a purely modern phenomenon, and such cases serve to really fire up the imagination.