Some UFO encounters are not only seen by multiple witnesses, but also by very traditionally reliable ones. On the evening of April 17, 1966, sheriff deputies Dale Spaur and Wilbur Neff were out on patrol in Portage County, Ohio, in the United States when something would happen that would forever change their lives. It had so far been an uneventful night, and when at 5 AM they came across an abandoned car on the side of the rural road State Route 224, near the town of Atwater, it was seen as something to break the monotony. Spaur got out of his vehicle to go investigate the car, not expecting to find much, and that is when he reportedly felt a sensation like vibrating and humming reverberate through his skull. When he looked around trying to figure out where the sound was coming from, he saw rising above the nearby trees something beyond his wildest imaginings. This would culminate into one of the strangest police chases on record.

Ascending out of the wooded are near the road was what looked to be a large, glowing disc, estimated as being about 40 feet across and issuing that odd humming noise. As the object slowly moved over the treetops, Spaur called out to his partner and was relieved that Neff was seeing the same thing and that he wasn’t losing his mind. That enigmatic disc then moved out across the landscape until it was hovering directly above them, bathing the area in light to create a sort of artificial daytime. They could see that it actually looked like “an ice cream cone tipped on its side,” and both men could hear that sound, which was later described as being like that of “an over-loaded transformer.” Although it was approximately 150 feet above them, they would both report that they could feel waves of heat emanating from it. 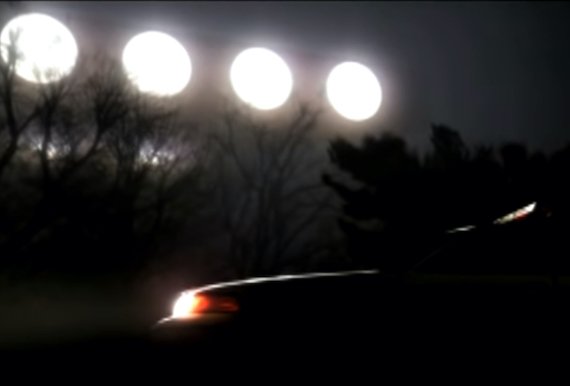 It then began a slow, inexorable crawl down the road, and Spaur was able to snap out of his awe and call it in. At first dispatch seemed skeptical and thought it might be a joke, but when they figured out that Spaur was genuinely in a state of duress they told him to fire on the object. Perhaps luckily for them, this order was almost immediately overridden by their sergeant and they were told instead to pursue it. As this was going on the police lines were being inundated with panicked callers reporting the same thing, and Spaur and Neff got into their vehicle to engage.

The two took off in hot pursuit, that strange craft oddly choosing to follow the road they were on. It picked up its pace considerably, at some points forcing the police cruiser to gun it up to around 103 miles per hour as they tore after it, and during this chase other law enforcement officers would become involved as well. One of these was police officer, Wayne Huston, who joined in the chase, and police Chief Gerald Buchert was actually able to snap three photographs of the object. During the chase the strange craft displayed evidence of intelligent control, maneuvering carefully and even slowing down when the road got too difficult for its pursuers or if they hit traffic, only to speed up again as if it were playing a game. All of this was witnessed by amazed locals, who were still inundating the Sheriff’s office with reports of what was going on. The patrol cars would screech and tear after this thing for a full 86 miles, often reaching over 100 miles per hour, until they began to run out of gas in the vicinity of Conway, Pennsylvania. As the cops stopped at a service station to fill up on gas the UFO dutifully stopped as well, as if waiting for them, but it must have gotten bored because it then made that humming sound again and allegedly shot up straight into the sky to disappear.

All of this was far from the imaginings of the officers, as the object had been clearly seen by hundreds of people over the course of the chase, and the very next day the media went nuts with it. “THEY TAILED A SAUCER 86 MILES!” one headline read, and before long it was nationwide news, the thought of these brave law enforcement officers chasing an alien spaceship across the state capturing the imagination. It was such big news, in fact, that it soon drew the attention of the U.S. Air Force UFO investigation, Project Blue Book. Maj. Hector Quintanilla, who was actually director of Project Blue Book at the time, personally went to Ohio to interview the men, although it seems more like he was there to explain it all away. During the time he spent talking to witnesses, Quintanilla’s story would change several times. He went from thinking it was a satellite to the explanation that it was a weather balloon, before going to the old standby that it was Venus they had been chasing, refracted through fog, basically a stationary celestial object they had mistaken for a flying saucer. Not only them, apparently, but the dozens upon dozens of others who had seen them chasing it. They had all seen Venus, according to the official statement. 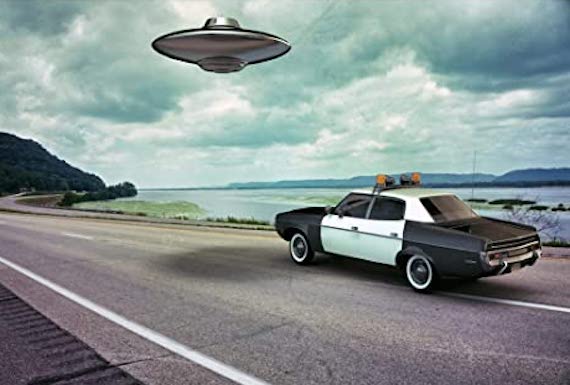 Of course, Spaur and the other witnesses insisted on what they had seen, but they were starting to draw their fair share of ridicule. In the face of increasing jabs at their credibility and accusations that they were making it all up, numerous witnesses even retracted their original statements in order to avoid the negative publicity, but Spaul stood behind his testimony, even as the whole experience began to take its toll on him. Not only did Spaul lose 20 pounds due to the sheer stress of it all, but by all accounts, he suffered a bit of a mental breakdown as well. He would end up losing his job, his wife would leave him and take their two kids way, and he would end up broke working in a coal mine in West Virginia. He would once lament to a reporter:

“Thirty-four years old and what do I have? Nothing. Who knows me? To everyone, I’m Dale Spaur, the nut who chased a flying saucer. If I could change all that I have done in my life, I would change just one thing. And that would be the night we chased that damn thing. That saucer.”

Impressively, despite all of this, he never deviated from his story, even as others who had been with him at the time backed away from it all. He would eventually remarry and move to Cleveland, where he would open a bar and try to lay low. He would even act as a consultant on the Stephen Spielberg film Close Encounters of the Third Kind, which is in part based on his amazing account. Sadly, Dale Spaur died of pneumonia on April 4th, 1983, having never backed down from his version of events even though it had effectively altered the entire course of his life. Many of his friends and family still believe him to this day, and his son, James Spaur, has said of his father’s encounter:

“He believed what he saw was extra-terrestrial. I believe him. Nothing we made could fly like that. In Pennsylvania, it hovered over his car. He could feel the heat coming off it. Then it went straight up and disappeared. Poof. Gone! And remember, my father served in the Air Force. You couldn’t put a bird up there he doesn’t recognize.”

What happened on that evening with these men? One idea had been that it was an experimental aircraft of some sort, another is that it was a weather balloon, and then we have the official explanation of our old friend, Venus. Yet, many witnesses saw this bizarre chase and reported the same thing, saying that it was a hovering glowing UFO that was very obviously under intelligent control. Or was it perhaps aliens? Although the other officers involved backed away from it all, they would still admit that they had seen something odd, and Spaur himself never faltered on his report, managing to remain mostly consistent even through continued questioning. Why would he do that when it was obviously ruining his life if it wasn’t true? This doesn’t seem to be a case of someone just trying to get a little fame. It all remains sort of an obscure account that has faded into the background, but it has all of the hallmarks of a great case, including multiple witnesses, intriguing details, and some very reliable observers. Whatever happened here, the bizarre UFO chase of 1966 is a pretty cool little case that we may never fully solve. The Mystery of the Carbondale Underwater UFO Crash