Some UFO cases are weirder than others. On June 27, 1947, a man by the name of Harold Dahl was out with his son, his dog, and two other men on a harbor patrol boat near the east shore of Maury Island, on the Puget Sound in Washington state. On this day he was out gathering logs that might be a danger to shipping, which they would then sell for a salvage fee, but his work was interrupted and his attention drawn to the sky when he allegedly spotted six “donut-shaped” objects hovering about a half a mile up in the air directly above them. Whatever they were seemed to glint as if made from some sort of metal, and they were estimated as being rather large, at 100 feet in diameter. This was all quite odd enough as it was, but it took a turn into the bizarre when one of the unusual objects suddenly dropped from the sky and Dahl could now see it had what looked like portholes along the side and even an observation deck. This would be the beginning of a very odd early UFO case that would bring together aliens, conspiracies, and the notorious Men in Black.

As the outlandish object fell further and further, it almost seemed as if it were on a collision course with the boat, and so Dahl began getting out of there as fast as he could, managing to make it to shore, from where he continued to observe the otherworldly series of events playing out over the sound. He allegedly took some photographs of the strange craft, and then something would happen to make it all even stranger still. At some point another of the craft dropped down to join the first one that had descended and seemed to join up with it somehow, like a kind of docking maneuver. However, whatever the craft were trying to do does not seem to have been successful, as a terrifying sequence of events would then unfold.

Dahl would claim that there was a sudden loud noise, and one of the ships began spewing out pieces of a white metal, followed by an eruption of what looked like “lava rocks” that hissed and steamed when they hit the water and flew everywhere. Some of these shards of dark material evidently were propelled towards the witnesses, raining down upon them, with one of the pieces injuring Dahl’s son and another actually killing his dog. After this the objects flew off and the terrified witnesses were left reeling. They then took their boat back to their original dock, finding that the radio was in operational and disposing of the dead dog along the way, and upon arrival Dahl wasted no time in telling the whole strange tale to his supervisor, Fred Crisman. At first the supervisor was skeptical, but when he saw the photos that Dahl had taken, he was curious. Crisman later allegedly went out to Maury Island to see the scene for himself, and as he was there he said he also saw of the UFOs, which he had the impression was watching him. It would only get weirder from there.

The morning after the incident, Dahl says that someone paid him a visit at his home. It was an unfamiliar man in a black suit, with a large black Buick lurking out past him sitting on the street. The stranger invited Dahl to have breakfast with him, which for some reason Dahl accepted, and they found themselves at a nearby restaurant. As they ate, the man began retelling the tale of what happened to Dahl exactly as it had happened down to the last detail, which startled him because it was almost as if he had been there. The black-suited man then issued a stark warning to Dahl not to speak of any of it to anyone, and that bad things would happen to him and his family if he were to do so. The mysterious man then made his departure and drove off in his enigmatic vehicle to leave Dahl sitting there shaking in fear and disbelief. It is largely thought that this is probably the earliest known report of one of the enigmatic Men in Black. 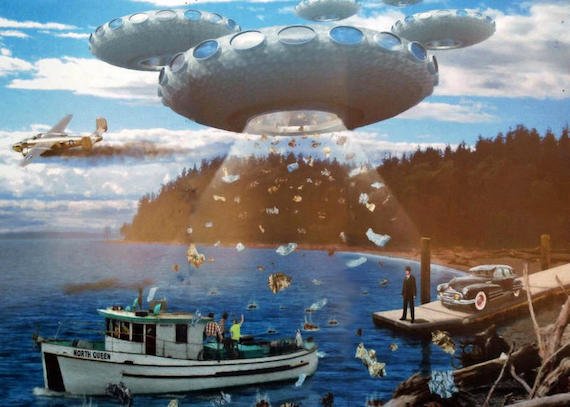 Despite the dire warning, Dahl and Crisman made efforts to get their story out, sending the photographs and pieces of the strange white metal to a Chicago publisher named Ray Palmer, and Palmer would then relay the tale to UFO investigator Kenneth Arnold. Upon hearing of this outlandish account, Arnold excitedly made arrangements to meet with Dahl and Crisman personally, flying out to Washington along with a pilot named E.J. Smith. After hearing the two men’s accounts and examining the supposed UFO fragments, they became convinced that Dahl and Crisman were telling the truth, and notified Federal investigators about it all. In July of 1947, two intelligence officers, Captain Lee Davidson and First Lieutenant Frank Brown of the U.S. Army Air Force, were sent to do their own investigation into the matter, interviewing the two witnesses before heading back to their base at Hamilton Field, California aboard a B-25 aircraft, supposedly along with some samples of the material from the UFO. Rather eerily, they would never make it, their plane crashing near Centralia, Washington to kill them both.

Adding to the intrigue of it all was that several witnesses would step forward to say they had heard what sounded like anti-aircraft fire at the time of the crash, and that they believed the plane had been shot down. Curiously, a journalist named Paul Lance, with the Tacoma Times, would write an article titled “Sabotage Hinted in Crash of Army Bomber at Kelso: Plane May Hold Flying Disk Secret,” in which he talks about the idea that the plane had been sabotaged or shot down, and also confirms that it was carrying some sort of classified cargo, only for Lance to turn up dead a few weeks later. Apparently, no cause of death could be ascertained. Making it all even weirder is that two of the bomber’s crew had been able to parachute to safety, with only the two investigators going down with the plane. Coincidence or not? The FBI would quickly deem the crash an accident. What happened to the supposed pieces of the UFO that were purportedly onboard? Did Lance’s death have anything to do with all of this? Who knows?

In the end, the feds would dismiss the entire affair of what was being called the “Maury Island Incident” as a hoax, saying that the pieces of metal retrieved were merely aluminum, and that the men were just enacting a publicity stunt. It did not help that Dahl himself would later admit that it was all a hoax, but then again he had once said that he planned to claim it was a hoax if questioned by authorities in order to get them off his back, meaning it is hard to know if it was a true confession or not. Dahl would also later recant his confession in a 1950 issue of Fate Magazine and say that it was not a hoax after all. As spectacular as all of this talk of exploding UFOs and Men in Black was, it did not really receive wide attention at all until it was written of in the 1956 book They Knew Too Much About Flying Saucers, by UFO researcher Gray Barker, which helped to propel both it and the notion of the shadowy Men in Black into the public consciousness.

In the end it is hard to know what to make of all of this, and theories have abounded. The official explanation is that this was all a hoax carried out by Dahl and Crisman, that there were never and pieces of metal or rock from the UFO, and that the B-52 bomber crash was merely an unfortunate and unrelated accident, its connection to the Maury Island Incident simply a coincidence. However, of course conspiracy theories abound, chief among them being that the government did find something, and that the crash was orchestrated to eliminate the investigators and their evidence. This ties in with Dahl’s claim of his strange black-suited visitor, and it is hard not to think that the timing of the crash and its victims, as well as the mysterious death of Paul Lance, are more than just a coincidence. Whatever happened here, it remains a case that has never really been solved and a tale of intrigue and conspiracies.