Among UFO sightings some of the more spectacular are those of mass sightings, in which many people, sometimes dozens or hundreds, witness the same strange things going on in the skies. Although rarer than most accounts, such mass sightings typically provide a rich variety of witnesses, many of them often very trusted people in social high standing, or professionals, trained personnel, and experts. They often serve to be harder to explain away than typical sightings, and usually earn there place among the more bizarre UFO accounts. One such incident occurred in England back in the 1990s, and remains one of the most amazing and famous mass UFO sightings there is.

The beginning of what as gone on to be one of the most talked about mass UFO sighting incidents in recent memory was March 30, 1993, in the country of England. On this evening there suddenly began a deluge of reports coming in from the across a swath of southwest England, particularly in the vicinity of Shropshire, of something decidedly weird in the sky, from witnesses of all walks of life and many of them traditionally reliable witnesses. One of the first reports came from a policeman who claimed to have seen a massive object resembling “two Concordes flying side by side and joined together,” and there were other reports that put the object’s size at a massive 200 meters long. Other reports claimed that the object had been observed sometimes flying very low to the ground, and there was even a panicked resident who claimed that it had landed in a field. Dozens of reports like this came in, and curiously people were giving different descriptions, including a cylindrical object, a triangular-shaped craft with three lights, and a pair of lights seeming to emit a tail-like plume, suggesting there was more than one aerial disturbance at work. Yet this was only the beginning.

Continuing into March 31st, 1993, the reports kept coming in, and it seemed as if the phenomena had gotten even more active. The evening of the 31st would also mark a series of high level sightings from police and military personnel, who had been on alert due to the sheer number of anomalous reports the night before. There would be several sightings made from RAF bases in the region, including sightings of a fast moving red light by personnel at RAF Cosford and another incident at RAF Shawbury. One meteorologist at RAF Shawbury by the name of Wayne Elliot would claim that a triangular shaped craft measuring around 200 feet across had slowly approached his base while emitting a low humming noise, and then shot a bright beam of light towards the ground before shooting off at amazing speed while leaving a luminous vapor trail in its wake. At no point were any of these objects picked up on radar at the bases. Some of the reports were scattered over a wide area, as another military encounter with one of the objects allegedly happened to an Irish military helicopter en route to Ireland over the coast of southwest Wales. The crew would report seeing “two white lights at a fixed distance apart in the horizontal plane” with trails visible through night vision equipment, that appeared to close the distance and pace them for a time.

The sightings were investigated by Nick Pope, who ran the UFO project run by the British Ministry of Defense (MoD), and he collected a steady stream of the reports, which he described as “coming in thick and fast,” in particular from the areas of Devon, Cornwall and Wales. Pope would claim to gather several hundred eyewitness reports of the bizarre unidentified aerial phenomena from March 30 and 31, and he also asserted that it was such a major and anomalous incident that it had even captured the attention of military officials at the Pentagon, who he believed included it in their 490-page secret report under the part of the Advanced Aviation Threat Identification Program. Pope  has said of this:

The Cosford Incident was the most high-profile and compelling UFO incident that took place during my time on the MoD’s UFO project in the early Nineties. It is probably among the best cases in our entire archive, that goes back decades and includes around 12,000 sightings. It is inconceivable to me that this wouldn’t be one of the incidents mentioned in the secret US report. I’m sure the Americans knew all about the Cosford Incident, and maybe conducted some discreet enquiries of their own. 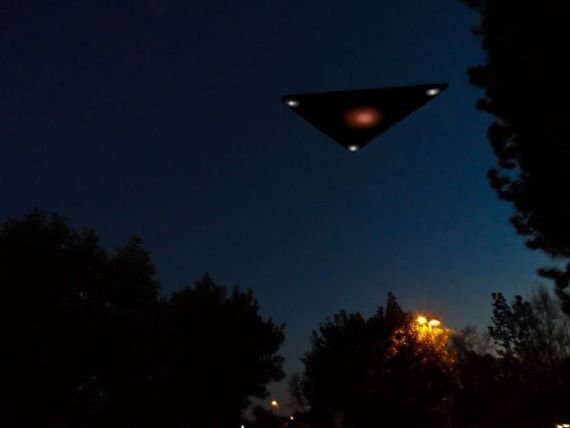 Despite how amazing this may all seem, we are still left to wonder about just what exactly was seen by all of these witnesses, and there has been much debate on the matter. One very prevalent theory is that the aerial phenomena were caused by some kind of falling space debris, notably the re-entry of a Russian satellite called the Cosmos 2238, which it turns out was scheduled to renter the atmosphere on the evening of March 31. This would not be out of the question, as falling space debris has caused UFO flaps before, and incidentally, a similar Cosmos satellite that had gone down in the winter of 1978 also coincided with a wave of UFO sightings. A reentering satellite might explain some of the sightings, but it would not really explain the fact that many of the reports describe distinctly triangular objects that were allegedly seen flying in a seemingly intelligently controlled manner, including changing speed, hovering, or flying low to the ground, even in one case landing and taking off, which doesn’t really fit in with the space debris theory. The Russian satellite angle also would not explain the sightings going on during the evening of March 30, nor the insistence of some very trained witnesses that these were not space debris. So what are some of the other other possibilities? Other ideas are that this was some sort of top secret experimental aircraft being tested, a military black op, or some strange atmospheric phenomena. There is also the possibility that this was just misidentified normal aircraft such as airplanes or helicopters. One local police investigator has said of this likelihood:

If there’s no full moon you would not necessarily see the shape of the aircraft just the three lights and perhaps the searchlight. On a number of occasions in the last nine years we have had people ringing the police to report UFOs and when we have checked our operation logs it has turned out to be our helicopter. On other occasions we have had people reporting UFOs who have actually seen airliners descending into Manchester who have switched their landing lights on or off. Most people have no idea of spatial awareness at night and cannot accurately judge the height or distance. We have had people saying they have seen things at treetop height and when we have checked it has been an aircraft descending into Manchester at 10,000 feet or more.

One argument against this is that many of the observers were reliable, trained witnesses such as RAF personnel, police officers, and the meteorologist, so how could they all misidentify a helicopter or plane? UFO investigator Chris Fowler has addressed this by explaining the problems with leaning too heavily on supposed expert witnesses, pointing out that even trained and seasoned individuals can be fooled by innate problems with our senses of perception. Fowler says of this:

The human visual perceptual system and cognizance are very discerning but easily fooled by events like those described here. It is part of common UFO reportage that lights and aircraft flying at night can lead to false reports of distance, altitude, time estimates, size and other fundamental attributes. We should take note all observers are fallible to misperception and illusory effects and to false interpretation and apply adequate reasoning here. These 1993 events may be exemplary in providing more evidence of the inability of those often described as ‘trained observers’ to discern altitude in lights than is supposed. It is fallacious to assume that certain subsets of people, by occupation, may be more or less accurate in their observations of lights, shapes, distance and altitude without providing evidence. Observational accuracy by any subset of witnesses depends upon circumstance and a willingness to apply useful pragmatic means to recording observations at the time and on some understanding of limitations.

One of the problems with trying to get to the bottom of the Cosford Incident is that Nick Pope has been accused by skeptics and even others within the UFO field of being a bit over zealous in his approach, and too willing to try and fit everything into his own preconceived theories. He has been accused of cherry picking, twisting and misrepresenting data to fit his needs, leading witnesses in interviews into the outcomes he wants, and generally exaggerating certain elements of the cases, giving misleading statements, or leaving out certain information to misrepresent the facts. For instance, although Pope has admitted that some of the sightings could have been space debris, he rarely mentions this, instead focusing on the more bizarre and mysterious sightings and elements. UFO researcher Gary Anthony has criticized Pope’s approach in relation to his participation in a documentary of the incident called The British UFO Mystery – Stranger Than Fiction, saying of it:

After watching the documentary myself, I wondered if Nick Pope had lost the real plot or not because in places there were exaggerative comments and the reports were misrepresented both by Nick and in the visual continuity and the narrating voice. The presentation was more geared towards Pope’s own personal and theatrical interpretation of the sightings and was laid out fallaciously for an unsuspecting public.  Relevant information was not included, witness participation was minimal and some of the facts presented were grossly out of context. He clearly has fallen into the trap of not recognizing salient features and errors of multiple witness reports, making links that do not exist and falling back on the questionable prowess of ‘trained observers,’ endowed with super-human abilities of discerning distance, altitudes and size in lights seen at night. A real house of cards. The programme featured only one witness, a lady who saw a row of lights whilst driving home. For the 45-minute plus feature exclusively on these sightings none of the official witnesses used to bolster the theme appeared.

In the end, the whole incident has sort of quietly been brushed away, and is rarely talked about outside of UFO circles, despite how many witnesses there apparently were. What was going on here? Was this merely space debris? Was it experimental aircraft, aliens, atmospheric phenomena, or all of the above? How reliable is Pope’s documentation of the supposed events and is there anything we are missing? There is no way to really know the answers to such questions and others like them, and we are left to wonder just what went on over the English countryside in March of 1993. Will truth about aliens soon be known? UFO sightings TRIPLE in just 21 years