On the evening of January 23, 1974, something occurred on the Berwyn Mountain range in North Wales that for some within the UFO researcher community has come to be known (to some…) as the definitive British Roswell. As researcher Andy Roberts stated in his excellent book, UFO Down?: “Running south-west to north-east across central North Wales, the Berwyn Mountains separate the flatlands of Shropshire from the Snowdonia National Park. Rising almost 900 metres above sea level, they have played host and borne silent witness to human occupation for millennia.” Andy elaborated: “Prehistoric man lived and worshipped on the mountains leaving behind him a dramatic, ritual landscape dotted with stone circles, standing stones and other once-sacred megaliths – many of which have stood for over two and a half thousand years. Not surprisingly, the area is rife with stories of ghosts and eerie presences. Folklore tells us that these mountains are haunted by many types of aerial phenomena, including the spectral Hounds of Hell: those who saw them recalled how they flew through the night sky baying as though pursued by Satan himself. To the south of the Berwyn’s at, Llanrhaedr-ym-Mochnant, the locals were plagued by a ‘flying dragon’ – intriguingly, a common name for UFOs in times gone by.” 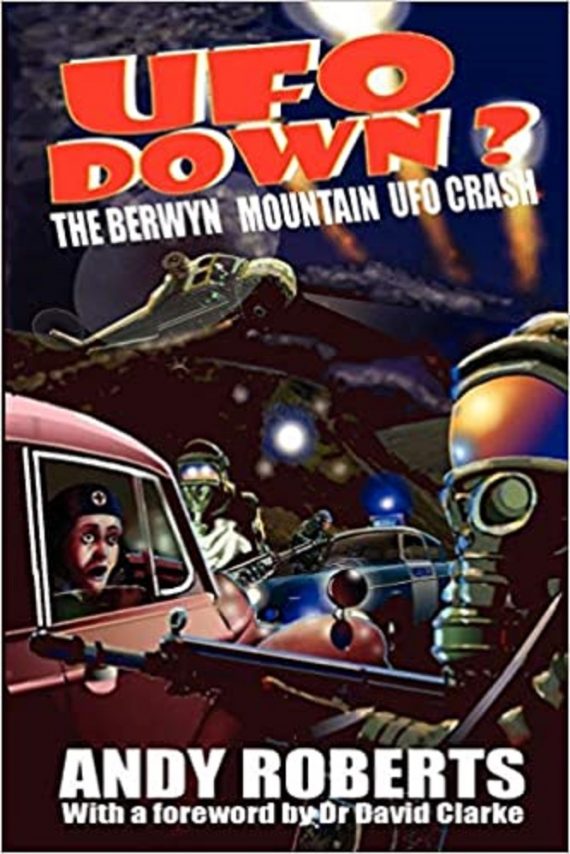 And as Andy also carefully noted: ““It is against this backdrop of history and myth that on the evening of 23 January 1974 an event took place on the Berwyn Mountains that was to perplex locals and spawned a veritable cascade of rumors, culminating in an incredible claim that, if true, would irrevocably change our view of history and make us revise our plans for the future of both our planet and our species.  The claim was that a UFO piloted by extraterrestrials crashed, or was shot down, on the mountain known as Cader Berwyn and that the alien crew, some still alive, were whisked off to a secret military installation in the south of England for study.” Since then, the issue of what did or did not occur on the Berwyn Mountains on the fateful night in question has been the subject of several books, intense controversy, heated debate and, at times, unbridled fury. That something happened at around 8.30 p.m. on the night in question is not in doubt, however.

“I saw this bright light hanging in the sky,” said Mrs. Anne Williams of Bro Diham, Llandrillo. “It had a long fiery tale which seemed to be motionless for several minutes, going dim and then very brilliant, like a dormant fire which keeps coming to life. It would have been like an electric bulb in shape, except that it seemed to have rough edges. [It] then fell somewhere behind the hills at the back of my bungalow and the earth shook.” That the events caused considerable excitement and concern was something also noted by Police Constable Gwilym Owen, who was off-duty at the time and having a pint of beer in the nearby Dudley Arms public house. He stated shortly afterwards: “There was a great roar and a bang and the glasses shook. The sky was lit up over the mountains. The color was yellowish but other people in the valley described seeing blue lights.” Five miles away, Police Sergeant Gwyn Williams was at home in Corwen: “The walls shook and the mirror swung away from the wall,” he recalled. “My first thought was that a big lorry had hit the cinema – it was that kind of a roar and bang. Everyone ran into the street.”

At 838 p.m., the Global Seismology Unit of the Institute of Geological Sciences at Edinburgh, Scotland, recorded an earth tremor between 3.5 and 4 on the Richter scale. In response to questions posed by eager journalists, Dr. Roy Lilwall, the Senior Scientific Officer at the Institute, said that he had been told that a meteorite had possibly come down on the mountain and, had it been responsible for the “earthquake” that had been recorded at Edinburgh, it would have to have weighed several hundred tons. Approximately ninety minutes after the events on the Berwyns, Ken Haughton of Betws-y-coed viewed a “luminous sphere,” some 400 feet across and traveling at an approximated height of 15,000 feet. It was Haughton’s opinion that as he watched the sphere, it proceeded to descend into the sea in the area of the town of Rhyl, or possibly in the Dee Estuary.

Andy Roberts added, “Following the explosion, Llandrillo district nurse Pat Evans ran out into the village street. She saw no lights but the explosion and the accounts of other villagers convinced her that something had crashed on the mountains. It took her a while to get through to the police as the ‘phone lines were jammed with 999 calls [Note from the author: the equivalent of the United States’ 911 emergency telephone number], but eventually she spoke to Colwyn Bay Police HQ. They suggested it could have been a ‘plane crash so she bundled her two young daughters into the car and set off up the mountain, intending to offer help until the emergency services arrived.

As Mrs. Evans reached the point where the B4391 mountain road levels out she was puzzled by what appeared to be a large illuminated ball of light on the hillside. Unable to identify it was she drove on for a few minutes before returning to the same spot. The light was still there so she parked and observed it for a while. A light drizzle was falling but the night was otherwise clear and Mrs. Evans was able to describe the ball as ‘large,’ and forming a ‘perfect circle.’ But it didn’t appear to be three-dimensional. In an interview she recalled, ‘There were no flames shooting or anything like that. It was very uniform, round in shape…it was a flat round…’ As she watched in puzzlement the light changed color several times from red to yellow to white. Smaller lights, ‘fairy lights’ in Mrs. Evans’ words, could be seen nearby.  It was too far away to reach on foot and so she returned home to bed.”

On the following day, 24 January, a Royal Air Force mountain rescue team from Anglesey was dispatched to the Berwyn Mountains and, along with personnel from Gwynedd Police, searched the location for any sign of the object or its impact point. In turn, they received assistance in the search from the RAF station at Valley, Anglesey, who flew two aircraft to conduct a detailed photographic survey of the area. Nothing was reportedly found. Adding to the mystery, and on that same day, Men-in-Black-style rumors were rife among the local and close-knit communities, suggesting that the area had been descended upon by shadowy government figures that were intent on interviewing anyone and everyone with knowledge of the incident. And only hours later, an unusual aerial object was seen by David Upton at nearby Gobowen. As he went out of the backdoor of his home at about 7.15 p.m., he was immediately struck by the brightness of an object in the western sky and quickly ran back into the house for a pair of field glasses. To his complete amazement, these revealed a disc-shaped object that seemed to be divided up into four distinct sections, each of which was of a different color – red, green, yellow, and purple. David Upton’s sister, Elizabeth, a twenty-year-old bank clerk, then took over the glasses, followed shortly thereafter by their mother, Mary Upton. Both verified David’s description.

“I had been watching it for about ten minutes and thought perhaps I should tell someone about it,” said Elizabeth Upton. She telephoned the local police, and they said that they would dispatch someone to the area. A minute or so after the call, the UFO disappeared behind a cloud. “We waited for the cloud to pass and when it did the disc had gone too,” she explained, adding: “When I first came out of the house the light from the object was dazzling, like a street lamp. When we looked through the field glasses we could define its overall disc-shape and the four sections.” Two people known to have been involved in the affair were Doctors Ron Maddison and Aneurin Evans of Keele University. Both expressed the theory that a meteorite had been the culprit. However, if the object was a meteorite they said, then it had to have (a) completely disintegrated upon impact; and (b) not left a crater, as Dr. Maddison noted carefully that: “…the only changes we could see were recent disturbances of surface soil in some areas, but we were hampered to some extent by light snowfall.”

Two days later, it was stated in the local press that “police and RAF rescue experts” had come to the conclusion that the strange lights seen throughout the area were due to meteorite activity seen – coincidentally – at the same time that a group of men were out on the mountain range hunting hares with powerful lamps. Any link with the “earthquake” was entirely coincidental. RAF search team leader, Sergeant H. Oldham, said that another search of the area was “unlikely” to occur unless further information surfaced that attributed the lights to another source. Perhaps not surprisingly, the “hare” explanation received short shrift with the local witnesses, as can be seen fin the following extract taken from a letter sent to the Wrexham Leader newspaper: “Regarding your front page article ‘Mystery Tremor’ in the issue of January 25, I find the explanation given absolutely ludicrous. The tremors shook houses over a 60-mile radius, and the lights were seen clearly miles away – this was reported by the national press and radio. I know nothing about ‘Hare hunting’ but unless the hunters use aircraft searchlights and kill their prey by lobbing a small atom bomb at them, then I fail to see how anyone can accept such an explanation.”

So what, exactly, did happen on that fateful night of 23 January 1974? Did the strange lights provide firm evidence that a malfunctioning UFO was hurtling towards its doom on the Berwyn Mountains? And was the so-called “earthquake” evidence that this same UFO had almost immediately thereafter slammed at high speed into the bleak and harsh mountain known as Cader Berwyn? Or, was the entire event the result of a large-scale misconception of a curiously synchronistic combination of a meteorite shower, an earth tremor, and a group of men hunting for hares on the mountain and armed with powerful lamps – all in the same location and at practically the same time? The questions are still being answered to this day.