Skip to content
There are certain people from history who have managed to gather about them plenty of mysteries and conspiracies. These are the individuals who have created all manner of talk of miracles and marvels, only to fade into history to leave nothing but enigmas behind. One such man was a scientist, thinker, philosopher, and inventor who came up with groundbreaking theories on technology, to go on to be employed by the Nazis to create actual functioning UFOs and then fade into history just as mysterious as ever.

Viktor Schauberger was born in Austria in 1885, and had a background that one might not immediately equate with someone who would later develop UFO-like technology. He grew up in a family of foresters, living on a vast swath of remote wilderness in Holzschlag, Upper Austria. He spent much of his youth and informative years tending to more than 10,000 hectares of land, and during this time constantly out in nature he began to make many observations that would profoundly change his life and philosophies. In particular, he became absolutely fascinated by water, which he saw as a living organism in its own right, calling it the “Blood of the Earth” and the origin of all life. He would especially focus on the many behaviors of water, such as its spiraling forms, vortices, flumes, currents, whirlpools, and its effortless harmony with the world around it.

He would obsessively study the movements and effects of water, going on to form many theories and inventions, such as groundbreaking new types of log flumes, his own system of hydrodynamics, in which he believed the inward moving and twisting water vortex could be harnessed for power and propulsion, and the beginnings of his revolutionary new idea for a new type of engine that would rely on implosions rather than explosions. He was entirely self-taught, never attending formal university training, yet he was soon attracting international acclaim with some of his ideas, patents, and inventions, as well as controversy. He was critical of many of the inventions available in his era, thinking that they worked against the laws of nature and were destructive, instead embracing the idea that humankind and nature could live together through the use of alternative sources of power such as harnessing the natural processes and living in harmony with them, with his motto being “Kapieren und kopieren,” or “comprehend and copy nature.” To him, many of mankind’s inventions were at odds with nature, and he would indeed later state that even the propeller was a flawed invention, saying:

As best demonstrated by Nature in the case of the aerofoil maple-seed, today’s propeller is a pressure-screw and therefore a braking screw, whose purpose is to allow the heavy maple-seed to fall parachute-like slowly towards the ground and to be carried away sideways by the wind in the process. No bird has such a whirling thing on its head, nor a fish on its tail. Only man-made use of this natural brake-screw for forward propulsion. As the propeller rotates, so does the resistance rise by the square of the rotational velocity. This is also a sign that this supposed propulsive device is unnaturally constructed and therefore out of place.

Schauberger sought to put his ideas into practice, coming up with an elaborate theory that water vortices could be used to build upon one another to produce larger and larger forces, which would in turn produce an opposing force to gravity, essentially anti-gravity, which he called dia-magnetism. He used these theories to create such fantastical inventions as a water implosion turbine that drew in air that spiraled to reach enormous forces, a machine which created a suctional force comparable to a typhoon in order to manipulate the temperature of a room, and a power generator that created energy from water and air using spiral pipes and jets. All of this worked on his principles of clean energy and working with nature, apparently creating little to no pollution and fully sustainable.

It may seem odd that such a radical promoter of green energy and working with nature would attract the attention of the Nazis, but attract it he did, and in 1934 he was approached by them. In 1938 he was allegedly ordered by Julius Streicher, a Nazi party member, to go about building a flying machine that could utilize a vortex engine that could be used in a disc-shaped craft that would be able to levitate, perform precise maneuvers, and move and accelerate at great speeds. They essentially wanted him to build a futuristic anti-gravity craft using his theories, and seeing as that this was the Nazis, he did not have much choice but to help them, being paid an exorbitant amount of money in the process. 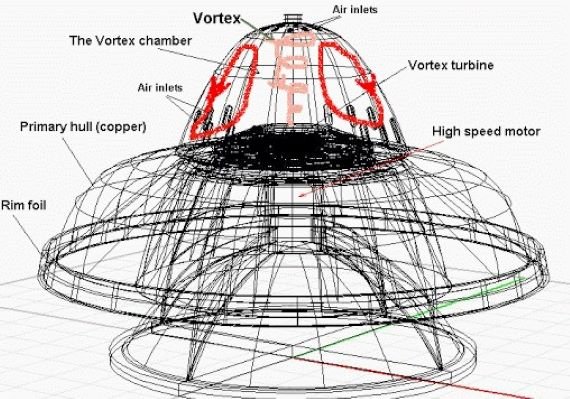 In 1940, he created the first prototype of his manmade UFO, which was called the “Repulsine A,” and which used friction between vortices and the surrounding air to force the air downwards to generate an overall lifting and propulsive effect, more or less producing a sort of mini-tornado upon which the craft rode. However, it was found that the engine was unstable, and that the fan within the device wasn’t able to rotate as fast as required because the blades were displacing too much air. No way was found to get past the problem of creating more intense rotational energy at the time, and the device was considered too impractical. Indeed, during tests of the craft, although it did indeed levitate, it was almost impossible to control or move forward, usually wobbling out of control or even shooting up through the roof. Allegedly, Schauberger’s failure to produce a working prototype caused him to be imprisoned for a time, before coming under the control of Heinrich Himmler. After this, he would be forced to work on a new type of silent mini-submarine, as well as to continue work on a new version of the anti-gravity device, called the Vril-7.

It is unknown just how far along Schauberger got, as the end of World War II arrived and brought the secret research of the Nazis to a halt, with most of his work, prototypes, and plans destroyed to keep them from falling into the hands of the Allies. The Americans, knowing just how important Schauberger had been to the Germans, arrested him and brought him to the United States, interrogating him intensely but never able to get much information out of him. The fundamental principles Schauberger employed would later be developed by several projects, including the Avro Canada VZ-9 Avrocar, which was a VTOL aircraft developed during the Cold War era and others. Schauberger would work on a variety of civilian vortex technology projects such as generators, water treatment, and air purification devices, before eventually returning to Austria on September 25, 1958 nearly penniless, and died five days later, taking any secrets he had to the grave with him. There have been conspiracies about him since, including that his research was pursued much further than has been let on, perhaps even explaining many of the UFO sightings during World War II, but no one really knows for sure. He remains in many ways a specter, the true extent of his work unknown and his research mysterious and much discussed.